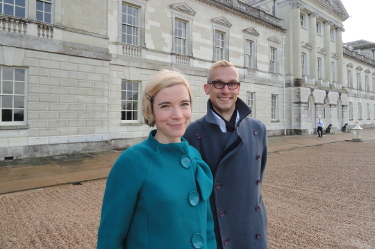 In Spring 2012, I co-presented a new BBC TV series on antiques with Dr Lucy Worsley. Called ‘Antiques Uncovered’, it focused on the social history, collecting, and creation of antiques, rather than viewing antiques purely as financial commodities. Many of you will know and love Lucy from her numerous history series including ‘If Walls Could Talk‘ for BBC4.
When we look at an antique, many of us don’t look much beyond its surface beauty and appearance, apart from perhaps questioning its value. Some started life as practical objects, whilst others were purely for decoration and an expression of wealth. But whether they’re from a stately home or a ‘two-up two-down’, they unlock a fascinating history of the way we lived – then and now. Lucy uncovered the stories behind some of these remarkable objects and how they relate to our lives today. I looked at why some items have become priceless, while others will become the collectables of tomorrow. Along the way we met the historians and curators who preserve these pieces, the highly skilled crafts people who still make them, and 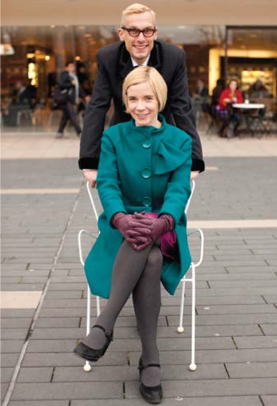 the passionate people who collect them. These objects tell a potent tale of a bygone era that still resonates today. Once the preserve of the privileged few, many have evolved over centuries into everyday items, shaping not only our environment, but how we behave and who we aspire to be.

Episode 1 – Entertaining
Woburn Abbey – Amidst Georgian splendour, we examined the history of tea, learnt how mechanical music changed our evenings, and goggled at the enormous cost of silver tableware and chandeliers.
The Chippendale International School of Furniture – Lucy learnt about Thomas Chippendale, carved a Chippendale-style leg, and looked at a chair worth £1million!
Nazeing Glass –  I learnt about the discovery of English lead crystal with glassmaker and historian Stephen Pollock-Hill.
Gladstone Pottery Museum – I spoke with master potter Kevin Millward about the secrets behind English porcelain, and the development of bone china.
Geffrye Museum – Lucy discussed the fascinating history of the sofa, from Shakespeare to today, with the curator.
Ken Scott – was kind enough to allow me to look at his amazing collection of gramophones and phonographs.
Peter Borratt – let me play with his vast collection of over 300 corkscrews from the late 18th and 19th centuries.
Wilkinsons – David Wilkinson showed me how his company continues to use Georgian and Victorian techniques to make the most stunning chandeliers.
Goldsmiths’ Hall – Senior gold and silver smith Dave Merry showed me some ‘illegal’ silver from their archive, and explained the ancient system of hallmarking.
Magic Lanterns – The episode closed with Lucy and I being entertained (and a little bit scared!) by a magic lantern show put on by expert and travelling phantasmagoria master Mervyn Heard. 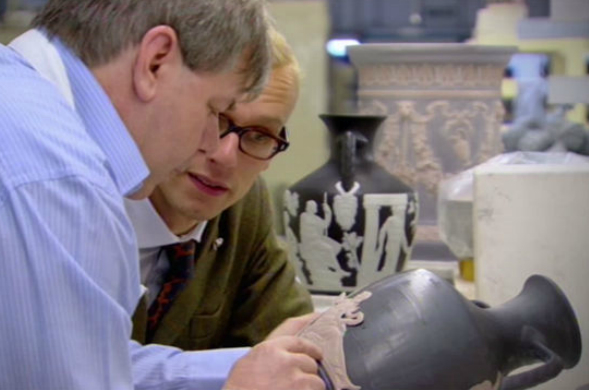 Episode 2 – Travel
Quex Park – Lucy and I began our journey at the historic home of Victorian explorer and inveterate traveller Major Powell-Cotton. We looked at luggage, globes, netsuke, and souvenirs.
Greaves & Thomas – I travelled to the Isle of Wight to see how centuries-old techniques are still used today to make traditional globes.
Robert Wrenn – Lucy took a ride in a carriage to discuss the history and importance of the carriage clock.
The Wedgwood Museum – I met curator Gaye Blake-Roberts to talk about how fashionable Josiah Wedgwood’s Jasperwares were in the late 18th century. I then watched as a replica of his masterpiece, The Portland Vase, was made using techniques that are over 200 years old (above).
Mangapps Railway Museum – Lucy and I visited this incredible private collection to look at railwayana, discuss the importance of the railways to all levels of society, and find out about the owner’s life-sized ‘train set’.
Henry Aldridge – I visited the leading auction house for Titanic memorabilia in the centenary year of the tragedy, and interviewed their specialist Andrew Aldridge.
Bentley’s – Lucy visited this top London luggage dealer to learn about Louis Vuitton, and look at some amazing luggage, including a bed that folded into a trunk.
St Pancras Station – Lucy met a collector and expert to learn about the sobering (quite literally) history behind Thomas Cook.
National Museum of Penny Slot Machines – We played on a couple of these marvellous, historic machines, and Lucy mainly won. We discussed the growth of the seaside, Blackpool in particular, as a popular holiday destination.
Donald McGill Museum – I met leading collector Bernard Crossley to talk about the famous saucy seaside postcards designed by McGill.
Blackpool Beach – the show closed with Lucy and I looking at Goss china, the Edwardians’ favourite souvenir, and at the development of holiday snaps via the Kodak brownie. 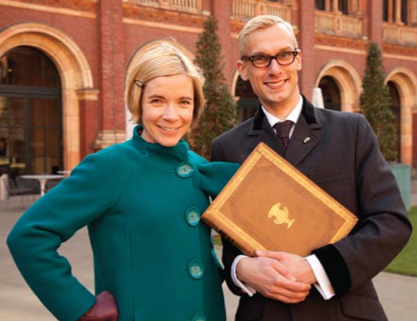 Episode 3 – Ceremony
Hever Castle – Lucy and I kicked off proceedings by considering the fate of poor Anne Boleyn, who once lived at Hever and whose marriage to Henry VIII was her last. Later, we tasted caudle and looked at the cups it was drunk from. Finallt, we (aptly) looked at a beheading sword and a rapier, and rowed on their lake whilst discussing the 1948 ‘Austerity’ Olympic Games in London and examining a medal.
S.J. Phillips – Lucy and I visited this top London jewellery and silver dealer to look at the history of the ring – a token given for lust, love, and marriage.
Monnickendam – I learnt how diamonds are cut, polished, and valued at this legendary and historic company, founded in 1890.
Meg Andrews – Lucy visited costume and textile dealer Meg to learn about the history of the wedding dress, and try a couple on!
A.E. Williams – I visited this historic, family-run company in Birmingham to see how pewter is still made today using techniques that date back centuries. I made my own caudle cup – from molten pewter, to moulds, lathing and, finally, polishing. And I got to keep it!
Ann-Louise Luthi – After Lucy dressed in full Victorian mourning costume, we discussed the fashion for mourning in the Victorian period, and the role jet played in it. I then visited Anne-Louise, whose amazing and fascinating collection covers mourning jewellery, and jewellery made from hair.
Raven Armoury – Blacksmith and replica-sword maker Simon showed us how a broadsword would have been made centuries ago, and showed us that techniques haven’t changed that much.
Royal Commemoratives – Lucy and I discussed royal commemorative wares outside Westminster Abbey before Lucy went off to meet a collector who had thousands of different pieces from nearly every monarch’s reign.
Archery – Lucy showed that she is as good an archer as a rower, as she looked at champion archer Queenie Newell, who won gold for Britain in the 1908 Olympics – and shot a few arrows herself.
Manfred Schotten – I visited Britain’s leading antique and vintage sports memorabilia dealer to look at some amazingly rare pieces, and a programme for the 1948 Olympic games that can be found for around £75.
Royal Festival Hall – Lucy and I then moved on to national, rather than sporting or personal, ceremonies. We visited the Royal Festival Hall and looked at an iconic design – Ernest Race’s Antelope chair.
Victoria & Albert Museum – Lucy and I looked at the origins of the world-famous Victoria & Albert Museum, and its connections with the 1851 Great Exhibition.
Adam Partridge – To wrap up the final episode of this series, I visited a thrilling auction of exhibition memorabilia to hunt out the souvenir that a typical Victorian family would have brought home from the Great Exhibition.

Now, that’s what I call a packed three hours of telly!

BBC Homes & Antiques magazine followed Lucy, me, and the production crew on a day of filming for episode 3. The resulting article was published in the May 2012 issue of the magazine. If you missed it, you can download the article by clicking here – HomesAntiquesArticle.