If you asked the average collector to name an important British glass designer, most would say Geoffrey Baxter. And if you asked then asked them to name his most iconic range, it would have to be the landmark ‘Textured’ range of 1966, released a year later. Don’t worry, I’m not going to sing the praises of this range yet again, as that has been done many times before. What I am going to do is give you an update on where his textured designs now sit within the market. I’ll look at this from three angles – values, fakes and lesser-known designs. 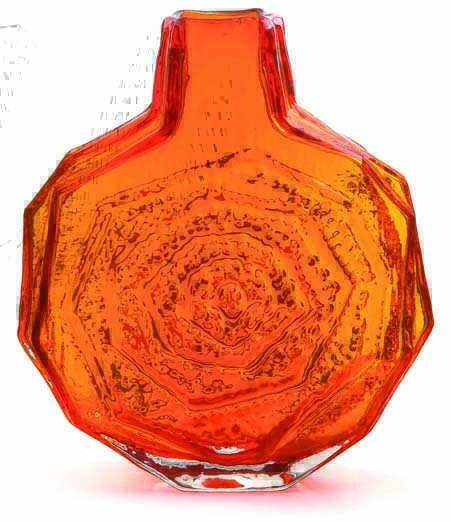 Some ten years ago, prices for Whitefriars rose steeply following innovative retrospective exhibitions and accompanying books. ‘Drunken Bricklayer’ vases once sold for under £20 were regularly selling for over ten times that, and a Tangerine ‘Banjo’ vase (left) could easily fetch up to £800. At the more affordable end, the more common cylindrical bark vases were fetching anything from £20-250, depending on colour and size. This ‘bull’ market was over by the early-2000s, and prices stabilised with a large and strong collecting base. A couple of years ago, prices even began to fall and plateau a little, as collectors turned their attentions to new subjects, lost interest, or ‘completed’ their specific collections.
However, this was not to last long. New research conducted by dedicated collectors, twinned with the obvious visual appeal of the designs and their importance to British 20thC design, has refreshed the audience, which has grown again. Prices have risen and stabilised once more. Recently, a Tangerine ‘Banjo’ sold on eBay for a little short of £1,000. However, as with many maturing markets, it’s the rarities that cause the most excitement. The only known red ‘Banjo’ has changed hands for around £5,000, and a possibly unique ‘reverse’ Drunken Bricklayer bears a price tag of £3,000, some eight to ten times the value of a standard example. However, there’s still plenty of scope to start a collection affordably with many more common designs still being found for under £150. As more people can afford these, and demand is still strong, prices are largely consistent. 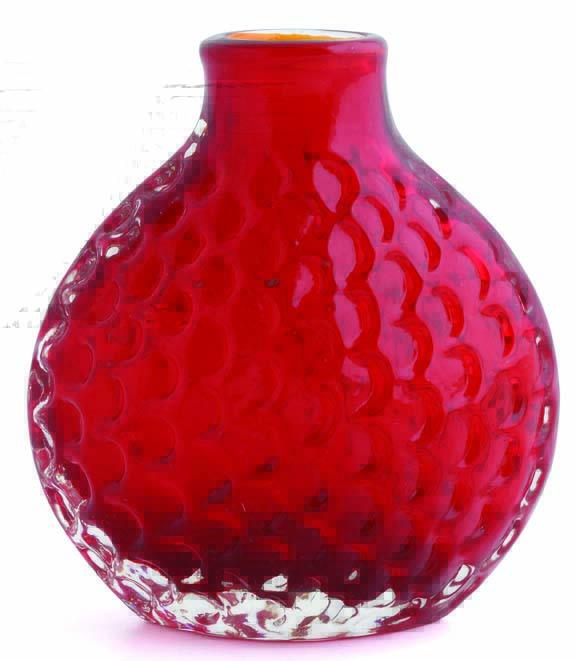 They say imitation is the finest form of flattery. It’s true that once an object reaches a certain level of value and interest, it’s likely to be copied. Take Staffordshire figures or Meissen porcelain, for example. Well, Baxter’s textured designs for Whitefriars have now reached that point. The last few years have seen a flood of fakes appear on the market. Many have been sold as being in a ‘rare colour’, and it’s this feature that is the most immediate form of identification, even though only certain shapes have been copied – so far.

Whitefriars only used certain colours for their Textured ranges from 1967-1980, and very, very rarely departed from these. Equip yourself by looking in a good book, and memorising the colour tones. Fake ‘Drunken Bricklayer’ vases have been seen in green (right), cobalt blue and a strong amber. The ‘Hoop’ and ‘Onion’ vases (left) have also been found in a strong red. Although many of these colours were never used by the company at this time, when they were, the colour tones of the fakes are completely different. The green of the fakes (right) is darker than the authentic Whitefriars ‘Meadow Green’ colour, for example.
Also consider the glass, and the texture itself. The red fakes are blown with a glass that feels almost waxy to the touch. 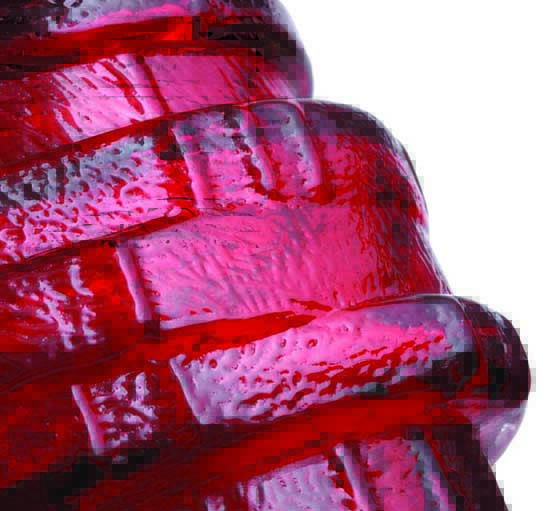 There’s none of the quality of Whitefriars’ glass in these Far Eastern fakes. Similarly, the textured surfaces are of poorer quality, indicating hastily copied and made moulds. Look at the detail image of the texture on a fake ‘Hoop’ vase (left), which is also quite different from that on originals. On fake ‘Drunken Bricklayer’ vases (below right), the textured detailing is different again – there are more dimples (28) on the middle brick than on authentic examples, and the dimples are arranged in a different configuration. Look closer, and you’ll spot other differences too. 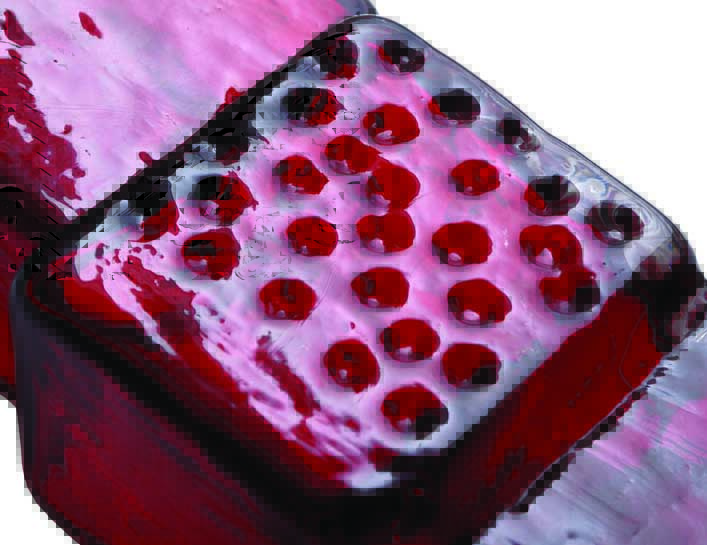 The casing on fakes often appears around the base only, and is poorly and unevenly executed. Looking at the bottom, the expertly polished concave pontil mark of Whitefriars is badly duplicated on fakes, with off-centre, large concave wells, or else this feature is moulded, as on the detail of the ‘Onion’ vase below. The key here is to get out and handle the stuff – that way your eyes, fingers and mind will work together when you spot something ‘rare’ at a fair. As to the value of the fakes – it’s decorative only, and I really wouldn’t encourage the charlatans who make them by buying or selling them.

I’m only aware of two ‘official’ reproductions made since Whitefriars closed in 1980. These were ‘Nuts & Bolts’ vases produced by ex-Whitefriars blower Eddie King and finished by master glassmaker Adam Aaronson earlier this year. Blown into a Whitefriars mould acquired by a group of collectors, one entered a museum collection and the other was sold at Fielding’s Auctioneers, raising over £400 for the campaign to save Broadfield House. The Whitefriars brand and name are owned by Caithness Glass, who acquired it in 1981 after it had closed the year before. Surviving moulds are split between the Museum of London and a group of Whitefriars collectors, and the rest are presumed to have been destroyed when Caithness went into liquidation in 2006.

So where to next for the canny collector? I think the smart money is on Baxter’s often-ignored early 1970s designs, which were followed with the ‘Late Textured’ range released in 1974. Major collector and pioneering Whitefriars expert Graham Cooley agrees, saying “Although the first Textured range was Baxter’s breakthrough, he perfected designs with this range.”. Looking at designs including the ‘Rocket’ vase, the two sizes of the ‘Rugby Ball’, the ‘Nipple’ vase, and the rather unfortunately named ‘Haemorrhoid’ vase, one can’t help but agree.

Although prices can be pretty high, due to their comparative rarity, many misattribute them or ignore them in favour of better-known designs, meaning you may pick up a bargain. A ‘Rocket’ vase can fetch over £1,000 in Kingfisher blue, whilst a similarly coloured large ‘Rugby Ball’ can fetch over £800. Less expensive examples include the fantastic ‘Double Diamond’ vase, usually worth around £120, or the ‘Stitched Square’ vase, usually worth around £150-200. The new colours introduced at that time are also noteworthy – Lilac, Sage green, and particularly Kingfisher blue, are appealing and very much of the period. And, as with all Whitefriars, certain designs in certain colours can be rare and more valuable. Consider fakes, prices, colours and shapes, and get your ‘eye in’ and get hunting before the market develops to envelop these designs too.

Images with thanks to and courtesy of the Graham Cooley Collection and Miller’s.

A detail shot of a fake Whitefriars red ‘Drunken Bricklayer’ showing a different textured pattern to the originals.

The incorrect, moulded pontil mark on the bottom of the fake Whitefriars ‘Onion’ vase.

A detail shot of the different, poorly executed textured pattern on a fake Whitefriars ‘Hoop’ vase.