One of the great joys of collecting inkwells is the vast array of different types available to us. From an appreciation of shape and material, to an admiration of the variety of different technical systems applied, this collecting area is thankfully a diverse one. However, for me, the most fascinating inkwells are those that combine all three themes. One remarkable period is the Victorian age, with its rise of industry and invention, and varied yet recognisable decorative styles. It was during this period that one of the most beguiling inkwells was manufactured – the ‘Isobath’, made for the De La Rue Company by Doulton in Lambeth, London. De La Rue are perhaps better known as manufacturers of the ‘Onoto’ range of fountain pens as well as printing many British banknotes, certificates and cheque books. 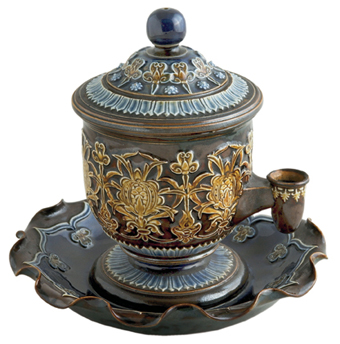 The Isobath that I used to own (left) always attracted attention when on display – I presume that was mainly due to its rich exterior decoration and unusual form. Typical of high Victorian taste, the ceramic body was ornately decorated with sprigged motifs of anthemion flowers on a brown ground. Further highlighted with blue and cream detailing, it sat on a wide decorative blue and brown coloured dish decorated with lambrequins and with a pie-crust edge that serves as a useful pen rest for pensive moments, like the second example shown here. You can easily imagine an Isobath on the heavy mahogany desk of a Victorian gentleman. The lidded ink chamber itself is large and has a small cylindrical dish protruding from the side for dipping the pen nib into.
As well as bearing impressed factory marks, examples are usually signed by the Doulton artist who hand-decorated each piece. Mine bore the incised monogram ‘ES’ to the base and lid, showing that this piece was decorated by the well known female artist Eliza Simmance (1873-1928). Others I have seen have shown marks for the renowned Barlow sisters (Hannah and Florence), and ‘EP’ for Emily Partington. Simmance is notable, and won many international awards for her work. The entire original design is credited to John Huskinson, another designer at the Lambeth factory. 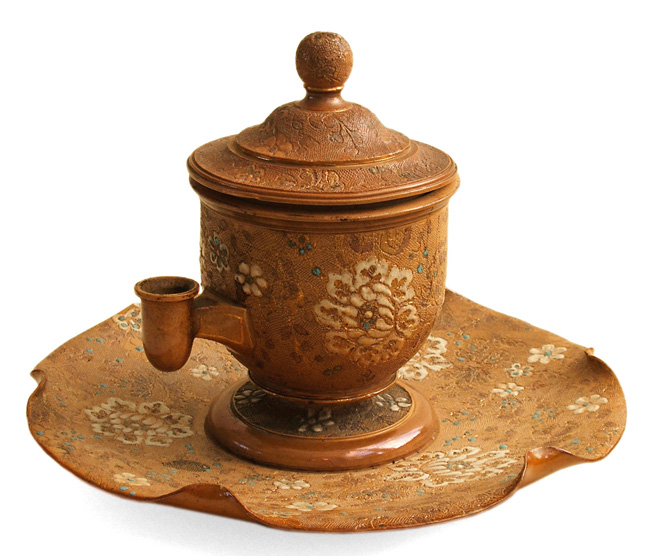 But it is when you remove the lid that the technically minded can become interested. Half of the inkwell is blocked by a ‘floor’ of black hard rubber which moves when pushed on one side, revealing that it is actually a rotating hemisphere attached to a shallow ring that sits on an internal shelf. As the writer dipped his pen into the side well, the internal hemisphere moved slightly allowing the ink used from the side well to be replenished from the main reservoir. This intriguing system was designed by William Thomas Shaw and patented on the 15th December 1888, dating the piece to the very late 1880s to the 1890s.
The date range I have given here is short – Isobaths are very rare and were presumably not produced in large numbers or for long. It’s also possible that they were expensive to buy or unpopular – or both. In his landmark book ‘The Doulton Lambeth Wares’ (Hutchison, 1975), Desmond Eyles says of the Isobath  “It is not known how many were made but they are seldom seen nowadays and are regarded as very unusual collector’s items.” (p167). 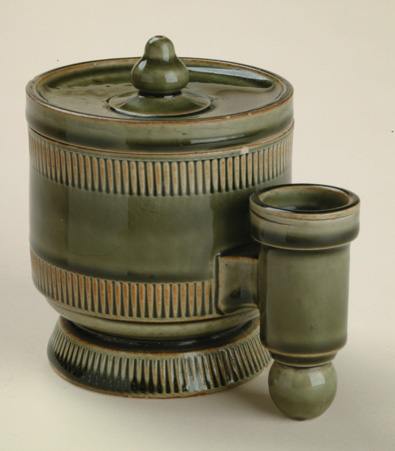 Inkwells as fine and rare as this usually command a comparatively high price, and the Isobath is typical of this, appealing to collectors of Doulton as well as inkwell collectors. In complete, undamaged condition, they usually fetch between £300 and £600 at auction. The last example I found on eBay sold just short of $600. The pie-crust edged dish is delicate and chips easily and the area around the lid, or the lid itself, often acquire chips through use. Collectors should also ensure that the internal black hard rubber mechanism is intact as this is often removed or lost. Complete, undamaged examples are extremely scarce.
There are also variations in terms of form (right) and decoration, such as the example with Slater’s Patent decoration above. So also have cut glass lids and no dish, but these are rarer than the standard design. Presumably the cut glass lid allowed the writer to check the ink supply more easily. Despite their relatively high price, I believe that these highly attractive and interesting inkwells are still under-priced as they combine the high Victorian tastes for decoration and invention and perfectly sum up this innovative period in inkwell history.

First published in The Stained Finger, the journal of the Society of Inkwell Collectors. Images with thanks to and courtesy of Lyon & Turnbull and Miller’s.