The first ever retrospective exhibition of the life and designs of Michael Harris was held at the prestigious Broadfield House Glass Museum in Stourbridge, West Midlands, from August 2008 to February 2009. The opening of the exhibition coincided with the third International Festival of Glass, and began with a lecture on Michael’s life and work given by Mark Hill.
The exhibition featured examples of Michael’s work from across his life, ranging from early pieces made at the very genesis of the studio glass movement at the Royal College of Art, through to his work for Chance Glass, Mdina Glass, and Isle of Wight Studio Glass. Over 250 specially selected pieces were displayed, offering visitors a unique opportunity to trace Michael’s immense contribution to 20thC studio glass design from its origins until his early death in 1994. 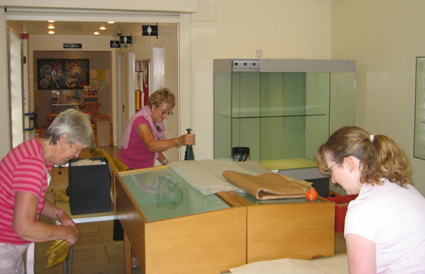 The Mdina Glass cabinet, with Michael’s earliest designs shown on the top left shelf. Nearly every shape designed by Michael for Mdina Glass from 1967-72 was displayed, with all the different primary colourways and patterns also being included. The iconic ‘Fish’ vases (top centre) are particularly important and sought after. 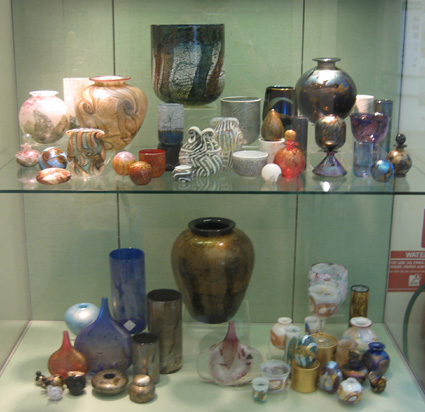 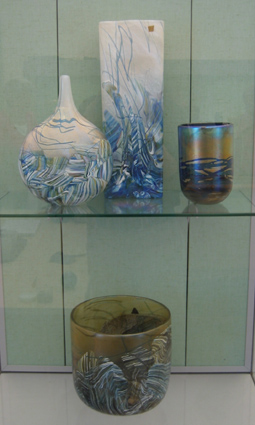 A fourth cabinet showed large examples of three inter-connected ranges – Seascape, Nightscape and Landscape. Nearly all the pieces were signed by Michael himself – rare features indeed. 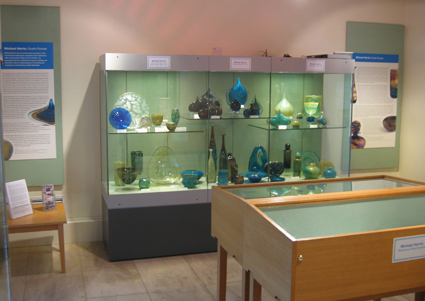 A view of the final display, looking back towards the cabinet of Mdina Glass. The table cabinets contained company literature such as sales and marketing brochures, labels and range lists. Never had so many of Michael’s designs from nearly five decades of design been displayed together in one room. 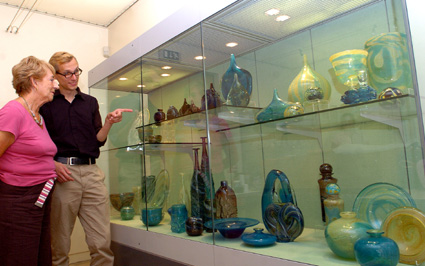 Elizabeth Harris, Michael’s widow, and I choose our favourite designs. Given that each piece was handmade on the end of a heavy blowing iron, the scale of some of the objects is quite incredible. 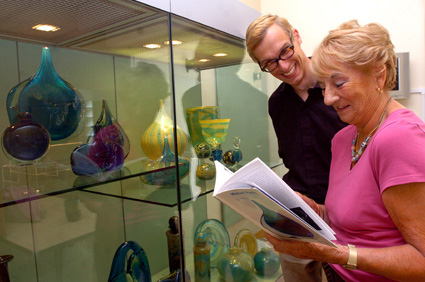 Elizabeth Harris happily reminisces as she looks through my book ‘Michael Harris: Mdina Glass & Isle of Wight Studio Glass’, to which she was a major contributor. Without Elizabeth’s formidable skills and experience at arranging displays, the exhibition would not have looked as great as it did.