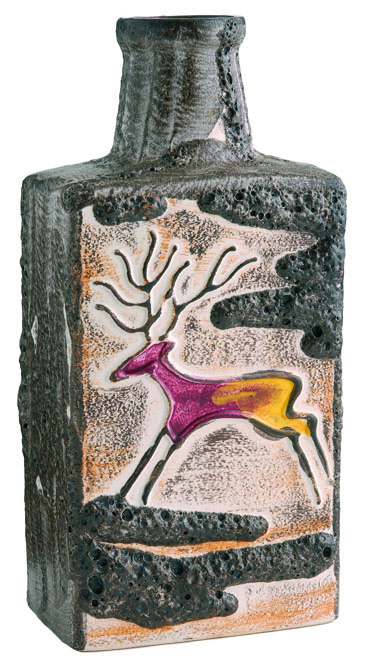 Like a collection, it started small and grew to be something much larger – and the end isn’t yet in sight. In fact, it started with a simple name a few years ago. When I was compiling my first ‘Fat Lava’ book in 2005, I researched a range produced by Scheurich and known as ‘Montignac’. A large bottle vase is shown here. Using the internet, I found a French town of the same name existed. Its claim to fame is that it is the nearest main town to the famous Lascaux caves that, in 1940, were discovered to contain the most intact and extensive range of prehistoric cave paintings yet discovered. That simple fact resonated with the decoration, which is clearly inspired by cave paintings in terms of the colours, the rock-like textures, and the designs used. I made the point in a footnote, and left it at that.
Upon editing the second edition early last year, I came across the note again. My slightly elastic deadline allowed me some time to muse more that evening. Over the intervening years, I had come across quite a few pieces of ceramic and glass that appeared to be decorated or inspired by prehistoric art. I wondered quite how influential this discovery may have been on 20th century design.
But first, for those who aren’t familiar with the story, to the caves we go. In Summer 1940, four French teenagers out walking their dog in the Dordogne discovered a cave, the walls of which were covered with prehistoric cave paintings of animals and hunting scenes. Imagine their excitement as they shone their torches across the walls decorated thousands of years ago in the Paleolithic era, and unseen by man since then. Archaeologists soon found that this was just the start – there was a whole network of caves, all decorated with perfectly preserved prehistoric patterns. 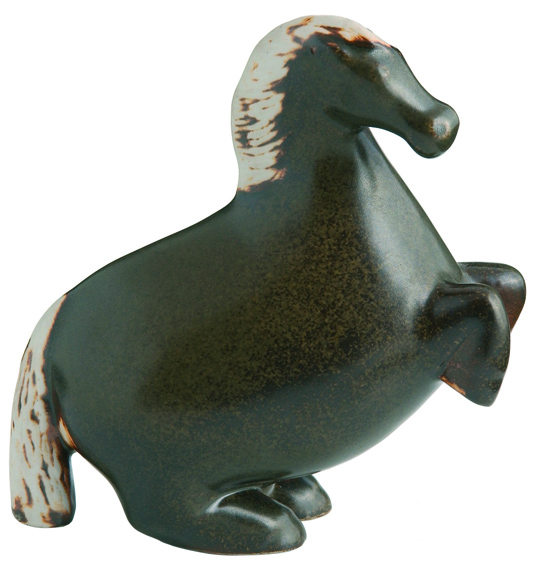 The sleepy French village of Lascaux became world famous instantly. Newspaper, television and radio reports attracted worldwide attention. In fact, during 1955, over 1,200 visitors arrived every day to see this ancient wonder, dating back some 16,000 years. So popular was the attraction that serious damage began to occur from the constant footfall and breathy gasps of visitors. As a result, the caves were closed in 1963, and a modern replica was opened nearby in 1983.
Typical of late 19th and 20th century commercialism, a vast and varied souvenir industry opened shortly after the tourists began to arrive. All manner of tat and treasures were offered, from tawdry novelties to artistic studio ceramics. This continues today. As a result, it’s not too hard to find French slip-moulded ceramics for anything from £10-100, much locally produced or designed, and decorated with patterns inspired by this most ancient art.
But what is more interesting is the coverage that this discovery would have received in visual mass communication – magazines, newspapers and, most importantly, television. After France, and indeed the world, was released from the Nazi grip this story must have made the headlines again. A world shaken by war would surely have revelled in this historic, pure and ancient art, despite the fact that at its core its aim was probably to teach people how to kill – even if it was animals as food rather than humans as enemies. 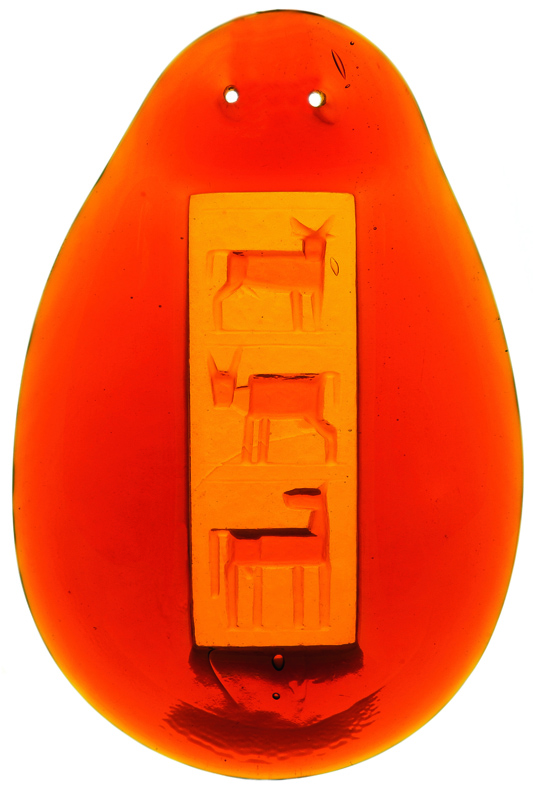 How many ‘sponge-like’ artists and designers would have seen these powerful images, that reach back to our most basic innate instincts, and been affected by them? As we don’t (yet) know the name of the designer of Scheurich’s ‘Montignac’ range, I started to think of other designers whose work mimicked or mirrored such Prehistoric patterns. The first that sprang to mind was the glass designer Erik Höglund. An impressionable eight year old boy at the time of the discovery, he would have been in his early 20s when they were more widely publicized – in fact, in 1953 he was invited to join Swedish glassmaker Boda by their dynamic manager Erik Rosen. From the images shown here, his inspiration was clearly Prehistoric art – could it have been Lascaux that sparked his interest?
His work from the 1953-73 is typified by its primitive, naïve and base appearance in terms of its forms, colours, decoration, and even the glass itself, which was often thick and bubbly. Primordial motifs are typically impressed into the glass. Höglund’s star is rising. Previously a minor name in Scandinavian modern art glass as compared to the mighty Vicke Lindstrand, Tapio Wirkkala and their contemporaries, people are paying more attention to (and money for) his works. Prices for ashtrays up to vases and sun-catchers are moving. An ashtray that is representative of his style can still be had for under £50, but studio works can go into the high hundreds of pounds. However, ‘unrecognised’ bargains can still be had.
Another artist whose work, closely related to the theme of this article, is rising strongly in value is Bertil Vallien. A colleague of Höglund, his sand-cast glass sculptural forms made around 1964 show similar inspirations in their forms and rough textures. ‘Pure Energy’ is particularly notable, appearing like a primitive man reaching to the skies.
But these are just two artists in glass – there are many more in many other media, and they are too numerous to mention on these pages. One such is Stig Lindberg, whose often naïve and primitive ceramic designs for Sweden’s Gustavsberg are modern, yet somehow also ancient in terms of their colour, appearance and use of line. The stylised ceramic horse shown above is typical of this aspect. That then led me along another avenue of thought. 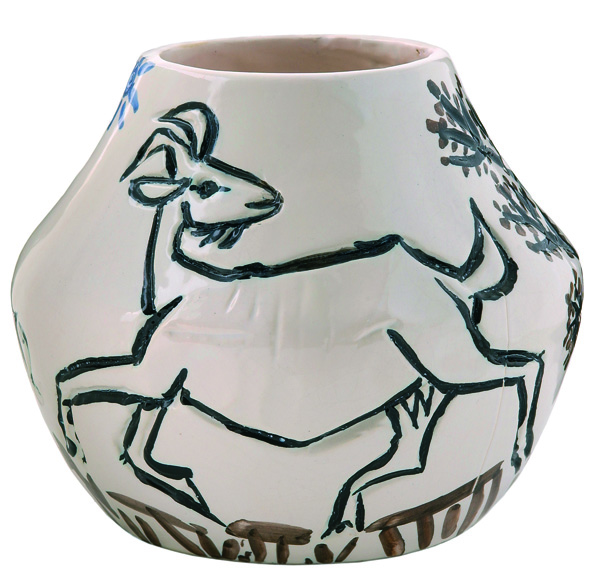 There is another influence that needs to be counted here – that of the archetypically modern artist Pablo Picasso. From the early 20thC and his Cubist phase onwards, Picasso pillaged ancient and tribal art for inspiration, and believed that the eyes of a child, unadulterated by modern society and its values, were the most precious and ‘original’ view of our world and experiences. Along with other ‘Paris School’ artists, features were stripped down to their most essential elements, inspired by forms of the past – all also highly appealing to hardcore Modernists such as Le Corbusier. Famous and highly influential across the world by this point, Picasso could arguably be said to be one of the major inspirations designers and artists were led by. Imitation is the finest form of flattery, and many modern artists flattered Picasso greatly. Was Picasso himself inspired by Lascaux, or at least bolstered in his core views by the discovery? After all, what view of the world could be more unadulterated than that of Prehistoric man? 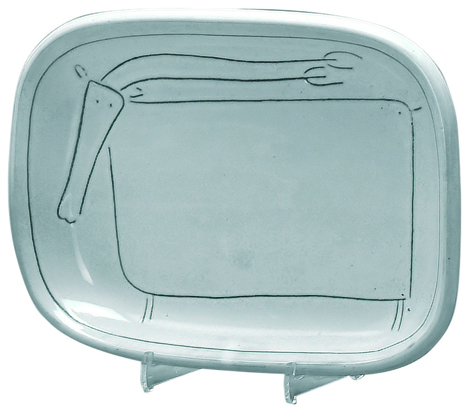 Looking at some of his ceramics produced at the Madoura pottery in the French town of Vallauris in the 1950s, you can certainly see a strong prehistoric nature in his work. Whilst Picasso’s ceramics fetch anything from the mid-hundreds to the high thousands of pounds depending on the design and the size of the limited edition, look-alike pieces produced by other potteries, some around Vallauris, keen to cash in on the caché of this artist turned ceramicist can be found for less. To identify them, look online or in reference books at his work, note the key themes and move from there. If you look, you can find copycat works ranging from under £50, to over five times that for pieces by noted designers working for noted potteries.
I’m certainly not saying that this is the definitive article on the subject, it just represents my ‘starter for ten’ ruminations. Earlier this year I found, and still find, it an interesting avenue to pursue for a largely affordable and historically important collection, and I hope you do too.

Images thanks to and courtesy of the Miller’s , Undercurrents, Mum Had That, Richard Wallis Antiks, the Graham Cooley Collection, and Kaupp Auctions.