The Ricardia range of art pottery is most notable for its wide and varied range of complex glazes which include fiery, contrasting colours, sparkling metallic inclusions, micro-crystalline bursts, mottles and dramatically dripped effects. Colours range from vibrant oranges and reds to deep blues, and gentle creams and greens.

Unique Art Glazes
As each piece was decorated by hand by a small team of decorators, the colours, pattern, and visual effects on each piece of Ricardia are entirely unique. The three lidded boxes shown here all bear the same glaze code (EE31) and base glazes, however each is clearly different. No painted patterns or designs were intended other than those abstractions that grew randomly out of the glazes themselves. The glazes, and the visual effects they created, were the only decoration.

Major Inspirations
Complex, artistic glazes such as these were popular from the late 19thC into the first two decades of the 20thC, when the production of art pottery boomed across the US, Britain and Europe. Ricardia’s glazes were almost certainly inspired by those produced by two illustrious forebears. These were Pilkington’s Lancastrian, who developed and used similar glazes from 1903 until the 1930s, and the 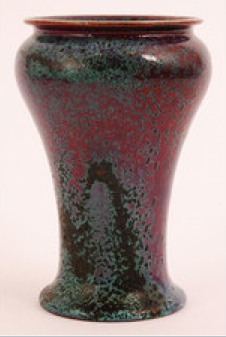 Ruskin Pottery, (vase, c1906, right) whose secretive founder William Taylor Howson produced even more complex, often lustre and micro-crystalline, glazes from 1898-1935.
Although not in the same league as these art glaze greats, Ricardia’s glazes stand up well against them. Apart from their clear visual similarity, this also demonstrated by the inclusion of Ricardia in the landmark ‘Art Pottery: The Legacy of William Morris’ exhibition at the City Museum & Art Gallery in Stoke-on-Trent in 1996 that also included pieces from Pilkington and Ruskin.
Ancient Oriental glazes were a major inspiration to art potteries, with Doulton and Bernard Moore being two excellent examples at different ends of the spectrum in terms of size. It is clear to see the influence of ancient Chinese ceramics on Ricardia, in terms of certain shapes, but more so with their complex, often fiery orange and red glazes and extravagant dripped effects. 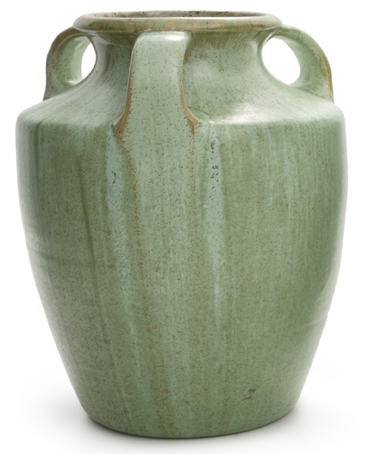 Minor Inspirations
There may also have been some inspiration George Clews & Co.’s ‘Chameleon Ware’ range, devised from 1914 by David Capper. During the early 1940s, wares produced at Clews were fired at Richards’ nearby Brownhills factory due to wartime fuel restrictions, and a relationship between the two companies may have existed before. Although Chameleon Ware is usually patterned, the often experimental glazes used may have been influential. Furthermore, Miranda Goodby of Stoke-on-Trent’s Potteries Museum & Art Gallery has noted that Ricardia’s shape and glaze code numbering is similar to that used by Clews & Co.
Depending on the year when Ricardia was introduced, the Devon based tile company Candy & Co. may also have influenced Richards and its Ricardia glazes. In 1922, Candy & Co. introduced an art pottery range, which was initially known as Wescontree Ware before being renamed Candy Ware (example above, c1937). Many of the colours are similar to those used for Ricardia, as are the mottled, streaked and dripped effects. Ricardia glazes are, however, considerably more complex and stunning, even if they are not as varied in terms of type and colours.

Changing Fashions
Artistic glazes and art pottery had largely gone out of fashion by the 1920s in favour of painted or printed stylised Art Deco patterns on less expensive, mass-produced ceramics. Ceramics by companies such as Poole Pottery, Carltonware, Crown Devon, A.J. Wilkinson (Clarice Cliff) and Susie Cooper are good examples. Despite this change, Ricardia was not the only company to buck the trend and introduce ‘old-fashioned’ art pottery glazes in the 1920s. Apart from Candy Ware (above) which was produced and sold into the 1950s, Clarice Cliff produced her dripped and mottled ‘Delecia’ glazes from the late 1920s-30s, and Shelley introduced Eric Slater’s ‘Harmony’ range of ‘drip ware’ in 1932. Nevertheless, the bright colours of Ricardia and Harmony would have worked in fashionable Art Deco rooms, and still found a market amongst more traditional buyers. 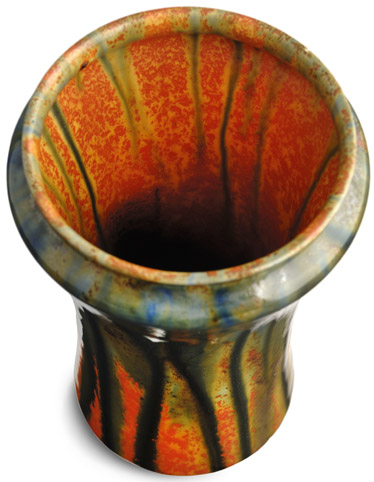 Complex Glazes
Some of the individual glazes that were combined to such great effect on Ricardia ware were taken from Richards’ pre-war WM (Wall Mottled) glaze series (see 1920s-30s Richards tile glaze catalogue page below). Good examples include the plainer creams, beiges, and light greens. However, it is likely that the other more dramatic glazes were experimental and mixed up in small batches for exclusive use on Ricardia art pottery. The artistic effects produced by combining glazes certainly did not appear on mass-manufactured tiles for sale to house-building companies. Nor did they appear elsewhere, as Ricardia did not sell these glazes or glaze combinations on, and nor did any other company attempt to copy them.
Interiors are typically decorated with a simple glossy black glaze. On bowls and shapes where the opening or mouth is large allowing the interior to be clearly seen, the interior is glazed to match the exterior. The Waisted Vase decorated with glaze EE1 shown here is typical.
Glazes were often applied generously and dripped down the body to the base where they pooled. As a result bases often had to be ground flat, as the pooled glaze would have led to an uneven base. 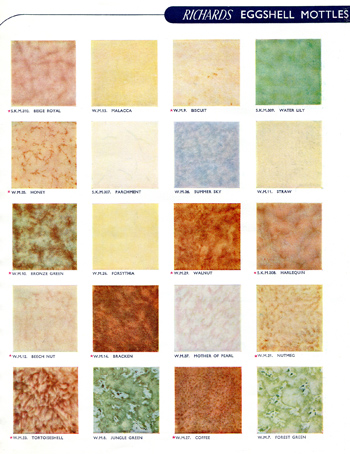 Chemicals & Metals
Many of the glazes used by Richards included chemicals and metals such as lead, selenium and uranium. Adding lead increased the opacity and flow of the glaze, adding to the strength of the colours and accentuating the dramatic dripped effects. Uranium oxide (Urania) allowed for vibrant colours, which ranged from fiery oranges and reds to bright yellows and greens, to black depending on whether the firing atmosphere was oxidising or reducing. The use of Urania also means that a Geiger counter will register a reading for many pieces of Ricardia, even though the radiation level is still weak and is completely harmless.
The use of lead in ceramic glazes was banned in 1947, and Uranium oxide was not used in glazes after World War Two, being finally banned around 1960. Combined with restrictions on materials in the immediate postwar period, these bans undoubtedly acted as another nail in the coffin for the Ricardia range, which was possibly only briefly and partially reintroduced after World War Two.
Less dangerous, but equally visually, appealing additions to the glazes include copper particles which give a sparkling effect. These are usually found in combination with orange or red glazes, and are indicated in the Glaze Code table below. Other chemicals were also added to make certain glazes blister and burst through layers of a contrastingly coloured glaze, or to make some glazes appear semi-matte or metallic against glossier glazes on the same piece.

Glaze Codes
The two digits following the letters ‘EE’ in painted marks on the base of a piece of Ricardia indicate the glaze code. Each glaze combination was given a unique glaze code, and it is not known what the ‘EE’ prefix stands for. Some pieces do not bear glaze codes – for more information on marks, please click here. The glaze examples shown below are purely a guide as they can vary widely from piece to piece, and from shape to shape. EE31 and EE2 tend to be amongst the most common glazes found, whilst Unknown 4 is very rare. EE47 and Unknown1 are highly desirable, as are any glazes with sparkling metal inclusions. Ricardia glazes and glaze codes identified so far are:

This is a work in progress. If you have any more information about Ricardia glazes, or know of the existence of other glazes not listed here, please contact me by clicking here.