The clever, or observant, amongst you will have noticed that 2011 is the 60th anniversary of the Festival of Britain. A landmark event that buoyed up the nation after the war, it celebrated our culture, developments in technology, manufacturing and design, and looked forward to ‘the world of tomorrow today’.
The main event was held in a specially built complex on the South Bank in London, but many other events were held in towns, cities and villages across the country. Apart from some inexpensively made memorabilia and accompanying programmes and brochures, all that remains of the event is the Royal Festival Hall. Designed by Leslie Martin, Peter Moro and Robert Matthew, the Modernist building contains important furniture designed by Robin Day. After undergoing renovations from 2005-07, it’s now once again a thriving hob of activity. 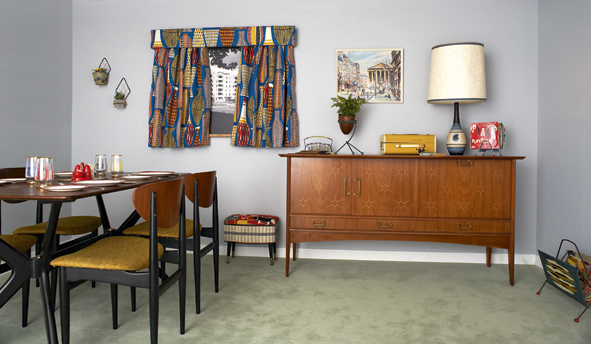 As part of the anniversary celebrations, part of the building has been devoted to the ‘Museum of 51‘, devised and organised by designer and retro-fiend Wayne Hemingway. After working with them at ‘Vintage at Goodwood‘ last year, Hemingway asked my friends at BBC Homes & Antiques magazine to design a 1950s room set using fashionable and fabulous furniture and original accessories from the period. They said “Atomic patterns; bright colours; sleek, angular furniture – the 1950s was when interiors changed forever, when design hit the high street and fashion moved from the catwalk and into our homes. Revisit the time in all its glorious technicolour in the Homes & Antiques 1950s living room and let us know what you think on the interactive phone.” Judging by the results I think they did a truly spectacular job. And you can read more about how Natasha, Keira and Angela put it together by clicking here. Go see! It’s free! 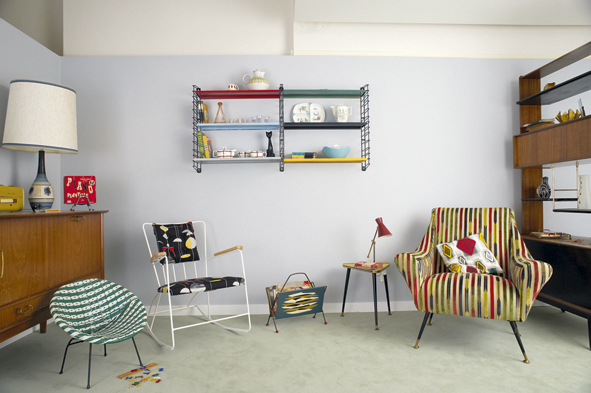 ‘Museum of 51’ is open until 4th September 2011, and also contains displays of a whole plethora of memorabilia and more. Perhaps the best time to visit will be from 29th-31st July, when Hemingway launches the ‘Vintage At Southbank Centre‘ festival and fair. Based on his run-away success at Goodwood last year, this is sure to be an unmissable event for vintage, retro and mid-century design lovers and fans, so click here to find out more.