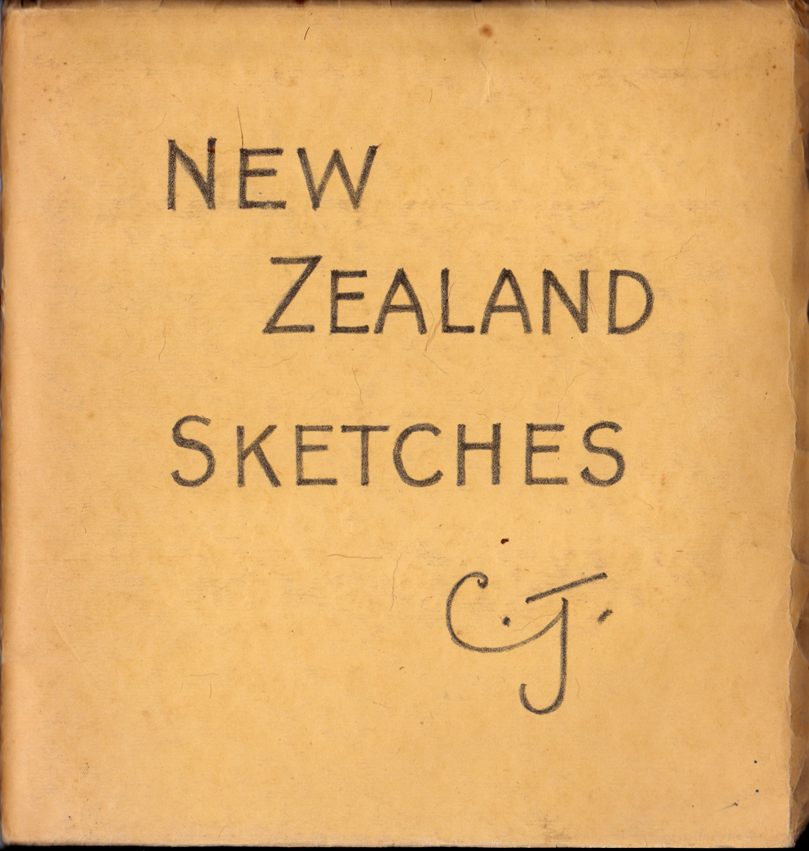 We were lucky enough to spend this Christmas visiting family in New Zealand who I hadn’t seen since I was five years old. Looking for suitable souvenirs of my travels, I found the prices for much good and worthwhile contemporary art or Maori crafts that I also liked to be beyond my meagre budget, especially given the cost of getting there! Furthermore, the banker had banned me from bargain hunting in antiques shops as it was deemed I needed a break. 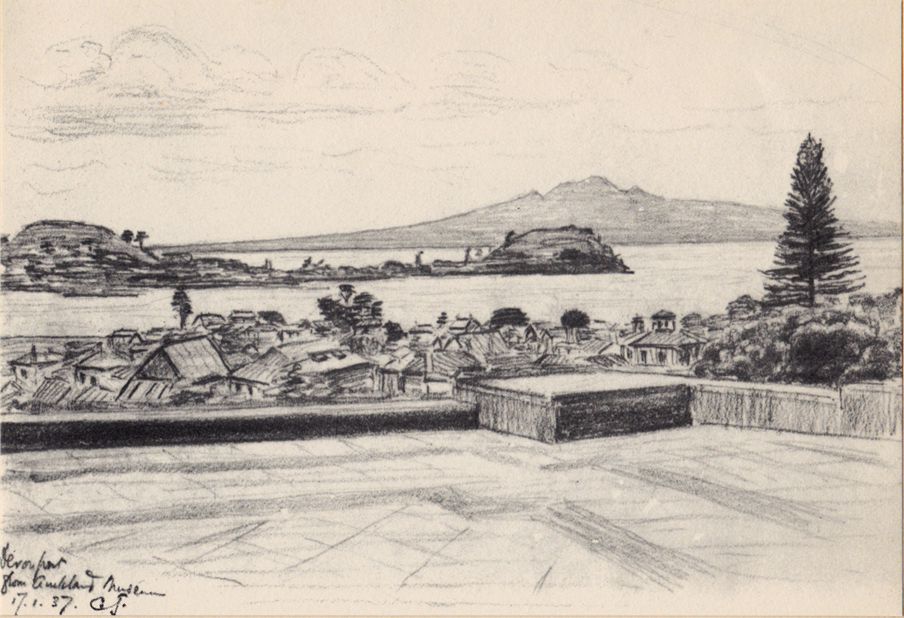 Banned from antiques shops I may have been, but neither the banker nor I can resist the allure of a secondhand bookshop. Thankfully there was a rather large one where we were staying in Devonport, Auckland (sketched, right) that was sadly closing down and offering a healthy discount on purchases. How could we resist? 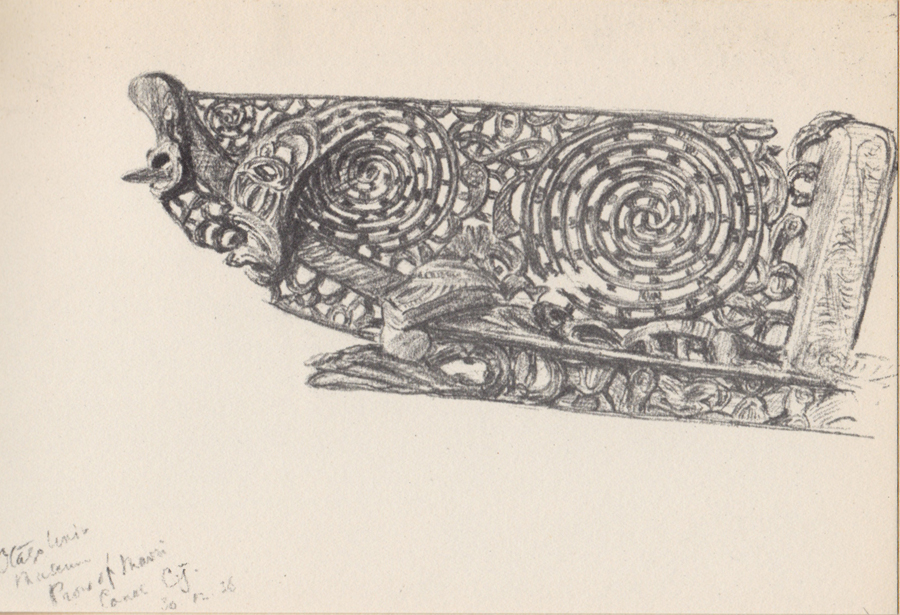 As well as picking up a few reference books, I spotted the book shown above in the New Zealand art section. Priced at NZ$30 (£15) with discount, it’s titled ‘New Zealand Sketches C.J.’, with C.J. presumably being the otherwise anonymous artist. The interior contains tipped-in reproductions of 24 pencil sketches by CJ of various scenes around New Zealand dated from 1926-36. Examples include Otago University Gateway (below), Dunedin from the High Street, Devonport (above), Mount Cook, Queen Charlotte Sound (below) and a figurehead from a Maori canoe in Dunedin Museum (above). As you can see from the examples shown here, they’re very charming but are more indicative of a talented amateur than a trained professional artist. 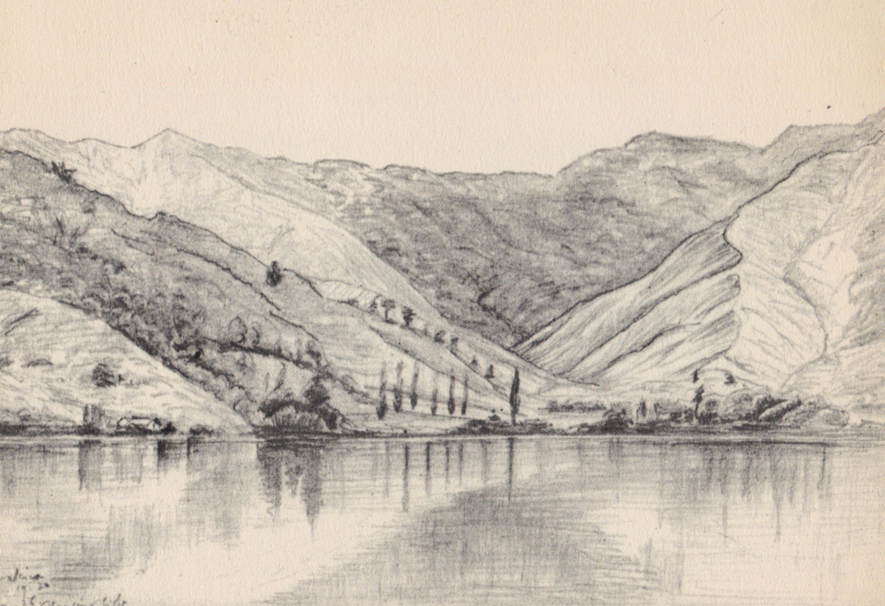 Despite being by an anonymous talented amateur, the book itself is rather well put-together, but doesn’t bear a publisher’s name, any printing details such as a date, or any indication of the artist’s name. I presumed it must be self-published as a sort of ‘vanity publishing’ for friends and a few sales, but by whom as it would have been (and still is) expensive to do such as thing? The answer literally fell right into my hands.
Lodged in the back of the book was a rather wonderful embossed and gilt deckle-edged card (below) reading ‘With Dr Carmalt Jones’ Best Wishes. Dunedin, N.Z.‘ in script. When I got home, a Google search revealed that Dr Carmalt-Jones was a rather interesting and talented man. 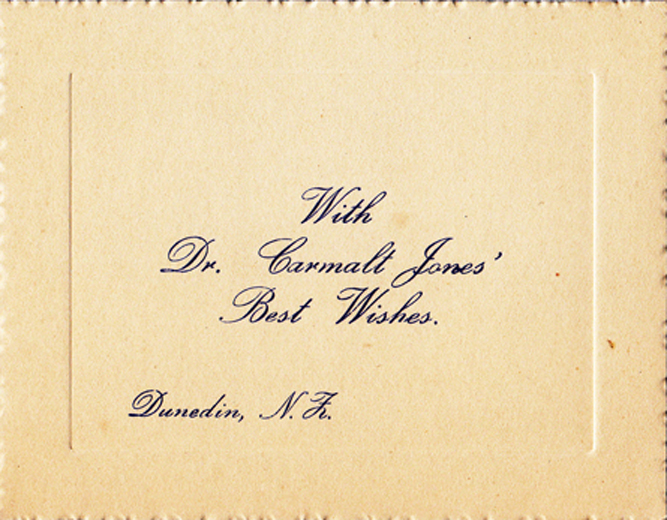 Dr Dudley William Carmalt-Jones (1874-1957) was educated at Uppingham, Oxford University and St Mary’s Hospital, London, from where he graduated in medicine in 1903. In 1912, he was appointed Dean of  Westminster Hospital Medical School, and in 1914 was elected as an F.R.C.P.. He served in the First World War from 1914 to 1918, and in the latter years was a consulting physican to the British Expeditionary Force to Egypt. A chance meeting with some ANZACs led him to apply for a suitable role in Dunedin, New Zealand after demobilisation.
In 1919, he was appointed professor of systematic medicine at the prestigious University of Otago. He was apparently more of an academic than a practising doctor from here on, and encouraged his students to study medicine rather than surgery. As well as bringing the traditions of Oxford University to Dunedin, he was a great sportsman and was interested in all aspects of the university. A widely cultured man, he had a deep knowledge of classic literature, wrote sonnets and was judged to be a good artist. He retired in 1939 but continued to be published in the medical field. He also wrote a small number of other books, including ‘Diversions of a Professor in New Zealand’ in 1945, which he also illustrated, and the book I now own. He moved back to England in 1946 and died in 1957. There’s almost something of the ‘country curate’ about this side of him, only he was considerably more experienced and qualified. The book named above and self-published books like mine seem to have been his personal ‘indulgence’, and he would have been comfortably wealthy enough to be able to afford to do them properly when he needed to.

His life and work has been reappraised in recent years, culminating in the publication of a biography, ‘A Physician In Spite of Himself‘, published by The Royal Society of Medicine Press in 2009. As one would expect, his medical achievements form much of the book and particular focus is given to his wartime work, where his deeply held ethics of humane medicine often jarred with the active service of the soldiers he treated.
I bought the book of sketches as it was a charming record of parts of bygone New Zealand that acted as a lovely souvenir of my visits to many of the places within, but the discovery of the high quality card piqued my interest and researcher genes. To find out that the artist was also an eminent doctor and cultured gentleman in New Zealand and beyond just adds to it. Had the card not been there, it’s possible that the identity of the artist and publisher of this book may never have been known.