I’ve just returned from the first Masterpiece fair, housed in a purpose-built temporary building at the old Chelsea Barracks site in London. And what a super experience. Somewhat replacing the now defunct Grosvenor House fair, Masterpiece showcases the very best in art and antiques from top dealers across the world.
As well as being rather dazzled by the fabulous pieces in the beautiful displays, I didn’t need to worry for my wallet as this was a fair where I knew temptation could never get the better of me! Despite this, I was surprised to see a few pieces priced in the low thousand and, although I don’t have any thousands, I know there are many who do. And seemingly lots of them turned up, from Mick Jagger and Giorgio Armani to thousands of lesser mortals like us. Early reports of trading were highly positive, perhaps proving that people are putting their money into fine things to enjoy for years, instead of the bank. 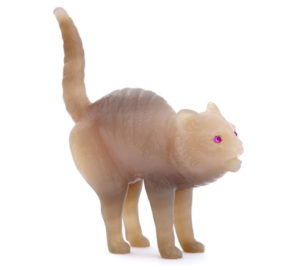 With muted cheers and groans about today’s England vs Germany football match in the background, the banker and I wandered around the jaw-dropping displays. As well as a nice mix of modern and contemporary pieces, we noticed a large selection of ‘statement-sized’ large glazed Georgian bookcases for sale. I also enjoyed seeing the stands of two friends and colleagues from the Roadshow – Ben Wright of clock dealers Carter Wright, and Geoffrey Munn of fabulous jewellers Wartski. They say that you learn something new every day, and a chat with Geoffrey ensured that – I now know what a Bezoar stone is, what it looks like, and where it comes from. Click on the link if you want to know too.
As for my own personal masterpiece from the show, it came again from Wartski’s stand. It’s this charming Fabergé cat, measuring a tiny 1.5 inches (4cm) high, and dating from c1900. Carved by hand in hardstone, its startled look both appeals and amuses. Although it has perhaps the best known name in precious jewels and metalwork behind it, and is naturally of superb quality, it’s the rarity of the sense of life and animation that makes it as important as it is.