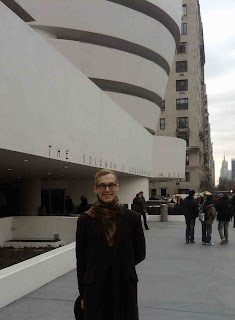 Sunday meant the (reputedly even better) flea market between 38th & 39th off 9th Ave, which we went to after an ‘interesting’ visit to the stunning Guggenheim Museum near Central Park. To look after bodily hunger as well as collecting hunger, the banker and I booked ourselves in for brunch at the perfectly situated and very trendy HK Hell’s Kitchen at 39th St and 9th Avenue.
As soon as we arrived it became clear to me that something was wrong. The entrance to the tunnel was busy as ever, but the streets around it were deserted. I realised it was cold and this time of year can mean the market isn’t as large as usual, but where was everybody? Our wait-person revealed all.
With a snow storm threatening up to 8 inches of snow later that afternoon, traders had voted with their feet not to come and set up, just in case they couldn’t get home afterwards. In turn, this made us concerned, just in case our evening flight was delayed, or even cancelled. We have work to do! Thankfully the storm blew in later than expected, and our flight managed to take off on time. I bet the dealers wished they had come into town! 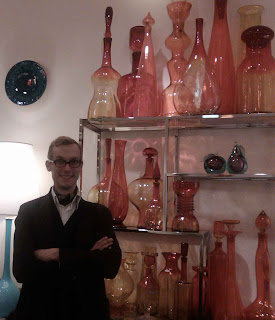 The disappointment was tempered by a delicious extended brunch and, on the way back to the Thompson Lower East Side hotel to collect our bags I stopped off at the newly refurbished ‘The End of History‘ on Hudson St in the West Village. It may be a grim sounding name, but there’s nothing grim about the contents of the shop, which are colourful, varied and extremely exciting. Here I am in front of a selection of fabulous Blenko Glass bottles and vases designed by Wayne Husted and others. When you’re there also make sure you check out probably the best and most vibrantly coloured selection of both Italian and Scandinavian glass on the East Coast. A real treasure trove of mid-century modern design, in the heart of the city, you’ll love it as much as I did. 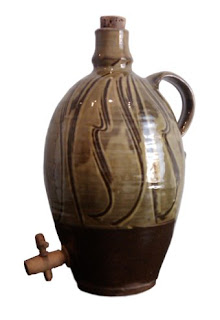 All of a sudden, the skies were darkening and it was time to return to London. Back at the hotel, I ‘borrowed’ a strong cardboard box from the porter and, armed with packing tape, I carefully packed my cider flagon amongst clothes to ensure it made the flight back intact. A yellow taxi ride and a dull check-in process later and the plane’s wheels left American soil. I had fun, great fun. See you next time New York!