Very early one cold, windy and rainy morning this Autumn, I found this vase at a fair in the South of England. Against the grey day, it did rather stand out. I automatically presumed it was postwar Italian from fifty paces, so honed in to have a closer look. Whilst it looked like the type of thing produced in Soviet Russia during the 1920s & 30s, upon closer inspection the quality and style of decoration didn’t quite match up. 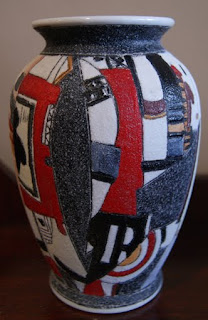 Perhaps it was some commercially oriented ‘rip-off’, produced in a factory in another Eastern bloc country like Poland any time from the 60s onwards? Or maybe it was the work of some small ceramics company somewhere, made in the past couple of decades by someone who was inspired by a book on Soviet ceramics?
The mark on the base, a basic dash of the brush, meant nothing and was almost applied so that it was at least ‘marked’. Having never seen one before, and as I rather liked its colourful abstract design that is somewhat reminiscent of a cityscape, I bought it. Later, I showed it to a friend, who is an experienced dealer in ceramics. Recalling one she thought she’d seen in someone’s collection some years back, she agreed and also rather liked it. Another colleague agreed it was postwar, but hadn’t seen one either. 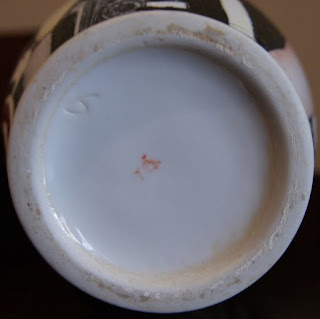 Or maybe it was brand spanking new – it was most certainly an option, much as I’d prefer to ignore the signs. And new is most probably what it is – two esteemed colleagues spotted two pieces with an identical pattern on a stand at another flea market this weekend. Although it doesn’t confirm they were made in China yesterday, that pretty much gives it away!
Whilst it’s not a reproduction, or a fake, of a Soviet Constructivist piece, it is attempting the style. I’d spent the previous couple of months doing nearly every major fair in the country, and visit plenty of junk, retro and vintage shops every week – I hadn’t spotted one before, so they must be pretty fresh to the market. My friend must have been mistaken. Still – if you like it, as I do, there’s no reason not to buy one at the right price!

Postscript – May 2020
It’s possible that these were produced during the 1980s (or even 90s) by a small ceramics company or factory – where, I do not know. I acquired another example this month that bears a gold and black address and telephone label for ‘Penzance Craft Centre’ on the base – the style of telephone number indicates it dates from the 1980s or early 90s. The incised design bears the same elements and, although they are roughly in the same place, there are some differences. This implies that decorators worked to a drawn design, rather than using a template or decal. In some cases the glazes are identical in colour, in other cases they are different tones, or have different graduation. So, in my mind, this means that the bodies were slip-moulded and then inscribed with the design by hand (and possibly glaxed with colours) before the body was (finally) fired. If you have any more information, please contact me!