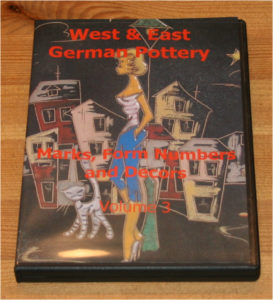 Any of you Fat Lava fans who haven’t come across Kevin Graham yet are missing a major trick. Kevin has been collecting and researching West German studio and factory ceramics for well over a decade now, and runs the highly popular and successful ‘Pottery & Glass Forum‘, which is free to join. I’d encourage you to join, as it’s the best place to exchange information about a subject we all love with like-minded people.
I’d also encourage you to check out his publications, which are positively bursting with information. Kevin’s first two books were ground-breaking in their own right, and he followed them up with an expanded database of shape numbers and manufacturers on a CD ROM. Now, he has updated both of those once again. 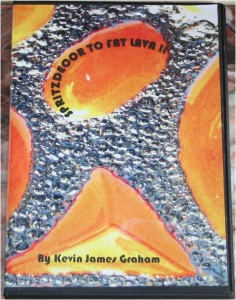 ‘Spritzdecor to Fat Lava II’ improves on the first with 18 more designer profiles, 8 more factories, new information on over 20 factories, 60 new photographs and much more. Fitting with our period of austerity, it’s also 10 euros cheaper at 49.95 euros. The third volume of ‘West & East German Pottery: Marks, Form Numbers & Decors’ has over 4,000 new form numbers covering an entire century, and has so much more new information including 56 new pages of decor names covering favourite companies such as Ceramano, Dümler & Breiden, Emons & Söhne, Fohr, Ilkra, Jasba, and more. All for the same price…what’s stopping you? To keep up with the times, CDs are available from the Pottery & Glass Forum, Retrominded in The Netherlands, and (soon) from Stuart at Bygone Times in Lancashire.