It’s all about the first look, and then about identifying and questioning what first made you think “Oh, that looks like a good thing”. It’s instinctive, even if you don’t quite know what or why. But there’s usually a feature or two that mark something out from the rest. We were visiting Saugatuck in rural Michigan on a chilly November afternoon, and I had managed to persuade the banker to let me visit the town’s antiques mall, despite us being on holiday.
It was the vibrant vibrant purple speckles in the beige, stony glaze that caught my eyes and piqued my interest, and I found the form pleasing on a second glance. Picking it up and turning it over, I saw a very unusual – but very carefully designed – hand-inscribed signature. Pretentious or pernickety potter, or something more? There was also the date – 1933. The $24 (£18) price tag was the final clincher, not that I needed one with an interesting glaze, a good form, and an interesting signature already in place. That night I googled ‘H.H. Sanders pottery’ and found that my instincts were right – there was indeed a story here. 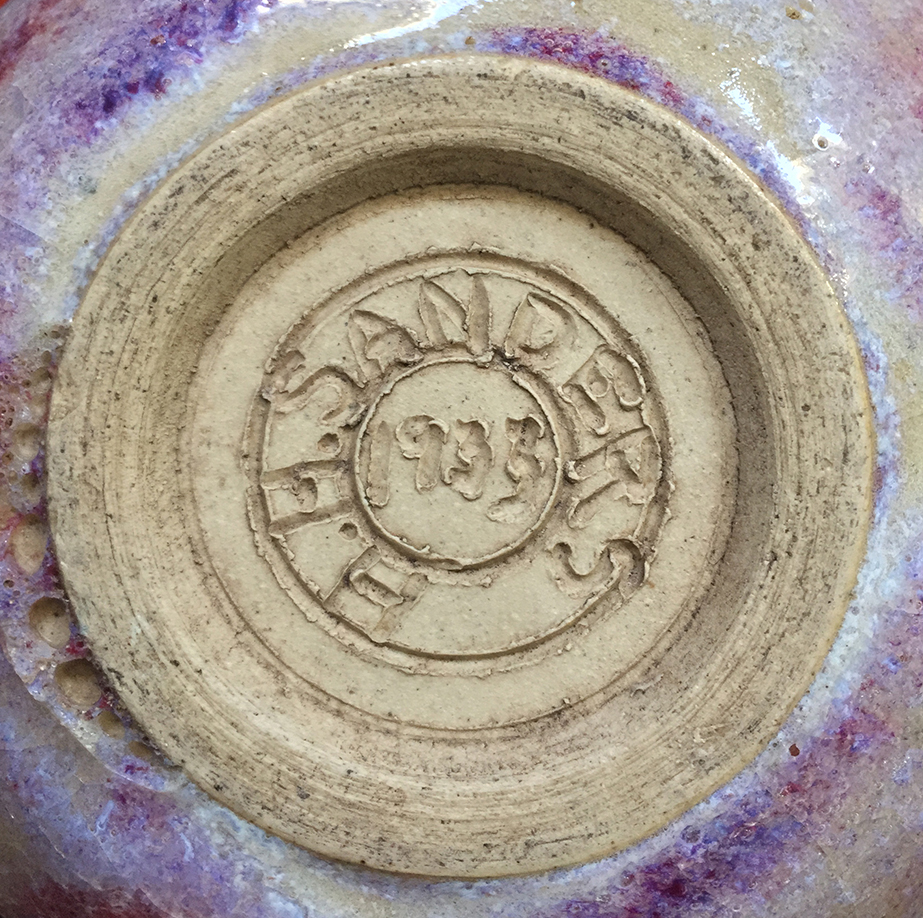 Herbert Harvey Sanders (1909-88) is inextricably bound into the development of studio pottery in America during the 20th century, and was a highly active and influential part of the first generation of American studio potters. He was born in Waterford, in the ‘pottery state’ of Ohio, and gained a bachelor’s degree in Education from Ohio State University in Columbus in 1932. He followed this up with a master’s degree in 1933, and then became a graduate assistant to Arthur Eugene Baggs (1886-1947).
Baggs is recognised as a key figure in the development of American studio pottery, and had taught ceramics at Ohio State University since 1928. He had studied under the pottery pioneer Charles Fergus Binns (1857-1934), established the Marblehead Pottery in 1904, and worked as a glaze chemist at Cowan Pottery from 1925-28. He is known for his simple forms, earthy tones, and his use of salt-glazes.

After leaving Baggs at O.S.U., Sanders then widened his experience by working with Edgar Littlefield and Carlton Atherton, and by teaching at the university and at two Ohio schools. In 1938, he heard of a job vacancy at San Jose State College, and moved west to found the pottery department there. The state had abundant agricultural land that offered indigenous clays and materials for making ash glazes. He widened awareness of his work and studio pottery in general by participating in exhibitions, writing papers and teaching. One such event was the prestigious ‘Art in Action’ at the Golden Gate International Exposition in 1940. 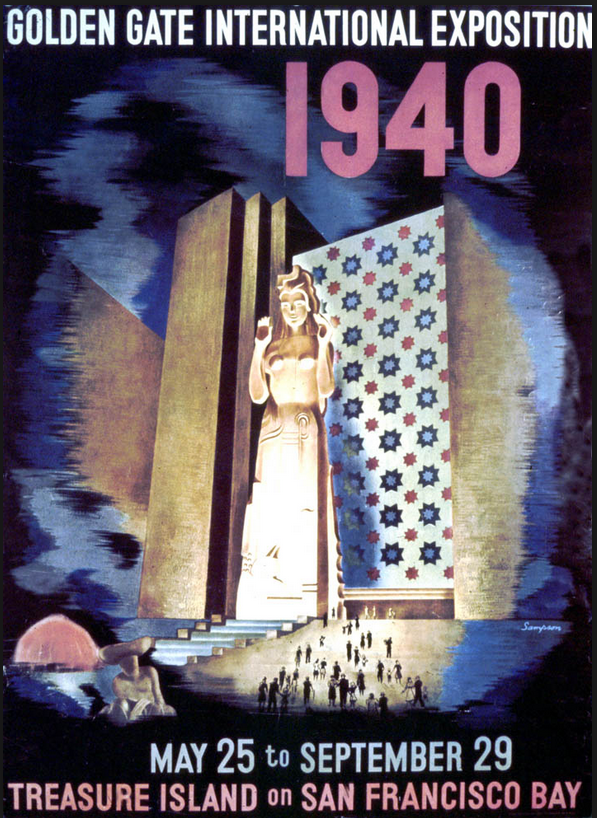 He survived serving in the war and moved East upon his return to the US, becoming an Instructor at, and then Director of, the School for American Craftsmen at Alfred University from 1946-48. In 1951, he used his G.I. Bill to gain the first PhD awarded in the US for ceramics. From 1948-52, he was an Associate Professor at San Jose State College, and he travelled to Japan to study pottery with a Fulbright Scholarship from 1958-59.
From the late 1930s to the early 1970s, he wrote a vast number of papers and books – some about Japanese pottery, and the crystalline glazes for which he later became known. Exhibiting widely, he also won numerous awards. His work was included in or the sole subject of around 70 exhibitions, including at the Whitney in New York, the New York Museum of Fine Arts, and the Museum of Contemporary Crafts in New York. In 1953, he had a one-man show at the De Young museum in San Francisco.
Outside the US, two pieces of his work were included in the American pavilion at the World Exposition in Brussels in 1958, and his work was exhibited in Scandinavia (1936), Cannes (1953), and across Europe in the early 1970s. Pieces by him were also selected to be part of the Smithsonian’s travelling exhibition of ceramic art from the U.S from 1966-68.

In terms of public collections that contain examples of his work today, the number is equally vast and prestigious, and includes the Metropolitan Museum of Art (left), the San Diego Art Museum, the Columbus Gallery of Fine Arts, and the Smithsonian. Across his teaching, exhibitions, and books, he clearly influenced the development of studio pottery in the U.S. until his retirement aged 65 in 1974. 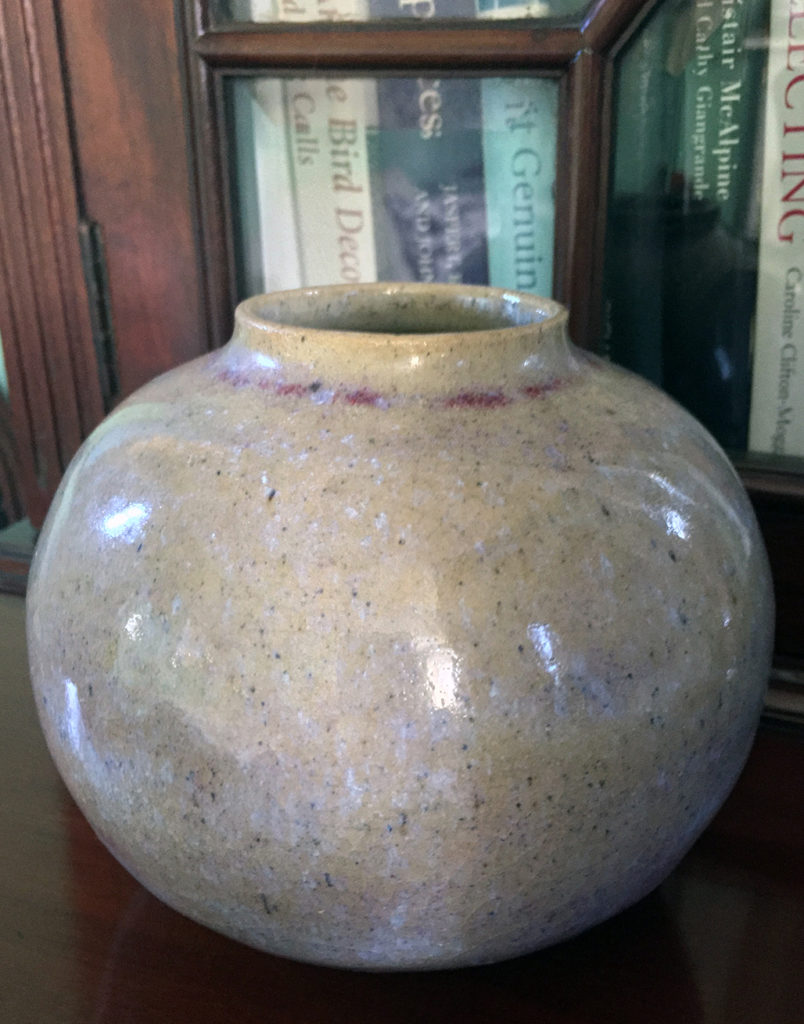 But back to my pot. It’s dated 1933 – the year he graduated with his master’s degree from Ohio State University. Like much of his early work, it’s in earthenware and shows his exploration of ash glazes and oriental forms at the time. It’s a well-potted, pleasing shape in a good size (11cm high, 12.5cm wide), and also shows the influence of Baggs, who he studied under and assisted. Dated as it is, it’s 11 years earlier than the example in the Metropolitan Museum of Art, and indeed the earliest example of this pioneer potter’s work that I can find recorded online.
In 1933, the Art Deco movement was in full swing, the iconic Empire State Building had been open for 2 years, and the US was just beginning to recover from the Wall Street Crash and the Great Depression. This unique pot was quite uncharacteristic of the general Deco vibe, but so very characteristic of the birth of American studio pottery. It was created at the start of the career of a man who was passionate about studio pottery and made his living potting and promoting the movement internationally. I wonder how this very early piece left his collection and how it ended up in chilly Saugatuck, for me to bring to London to add to my collection?
My $24 ($18) pot demonstrates that you can still find significant things for affordable prices out there, despite the proliferation of TV shows and books on antiques and collecting and, moreover, the dawn of the digital age. It also reminds me that, even though I get it wrong from time to time, it’s always worth trusting my instincts – but backing that up with questioning the object as to why it attracted me in the first place. If interesting key features pop up, dig, dig and dig further – there’s bound to be a story in there somewhere, and who knows what you might find?