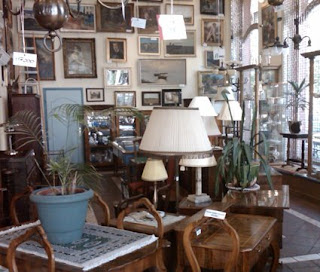 Spurred on by yesterday’s success, I went once more into the sun to find more bargains in Budapest. I spent quite some time doing this in Summer last year, and you can read about my experiences by clicking here. One of my first targets today was the chain of state-owned ‘BAV‘ stores that sell secondhand, retro and antique goods. The branch on Frankel Leó Utca in Buda is particularly good and always worth a visit, selling everything from the 1800s onwards. Here’s a view of the interior to give you some idea of the variety available.
The cabinets in the middle of the picture made me smile, as they were packed with modern Czech glass. Not a place to barter, I noticed prices had risen markedly since the last time I was here. Still, it was great to browse around and see what others were buying, even if I couldn’t find anything I simply had to have. In Pest, the branch on Bécsi Utca is always worth as visit, as is the branch on Falk Miksa Utca, which is Budapest’s ‘antiques alley’. 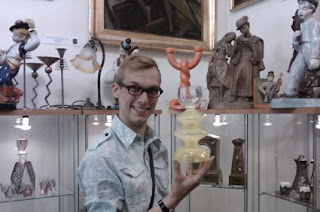 Indeed it was there I went next. I noticed the street had become much busier and also that many more shops had opened up sicne last Summer. One that caught my eye was

53u">Nàfsa Antik Galéria at no.22. Stocking a wide range of glass, ceramics and metalware from the late 19thC onwards, but specialising in the 20th century, there’s plenty to look at. My eye was caught by a range of glass produced by Karcag, named after a town outside Hungary. Often known as ‘veil’ glass, it’s characterised by a layer of very brightly coloured ‘crackle’ glass, covered with a layer of colourless glass. Think vibrant yellows, blues and pinks that sparkle in the light due to the web of sealed cracks, which were caused by dunking the hot body briefly into cold water. Little is known about the factory which was founded in 1940, with this popular range being designed by Zoltan Veress (1901-65) and Zoltan Suha (b.1932) in 1961, and introduced a year later after it was approved by the design jury. Veil glass was produced into the 1980s, with additional shapes being added by Lazlo Hornicsek over time. The company even went on to produce a range of (probably centrifugally made) glasses for IKEA! Shapes for veil glass tend to be modern, clean-lined and simple. This candleholder (above), shaped almost like an electrical insulator was my favourite, but I was also drawn to a cocktail shaker with a handsome Deco chrome top. At around £80 each, my budget didn’t stretch that far, so they’re still there if you want them!