Last weekend was spent in Berlin, visiting friends, but also indulging in more than a little hunting around the flea markets and vintage shops of this trendy city.
First stop was Deco Arts in Motzstrasse, in the Schoneberg district. I had passed this shop many a time, and each time it was closed. Thankfully, this fourth (or maybe fifth!) time round, I was lucky, and the door was open. Charming interior decorator Marie-Pascale certainly has an eye for mid-century modern, and her smart shop is packed with treasures from around Europe, including furniture, lighting, ceramics and glass. One reason why I was so keen to look around was the price point there’s plenty to buy at well under 100 euros, and prices in general are very sensible and excrutiatingly affordable. I was tempted by a rather lovely Ceramano vase at a bargainous 25 euros, but as the weekend was still young and hand baggage was tight, I grudgingly left it behind. I really do recommend a visit to this Modern, and Modernist, palace – I’ll be back for sure. 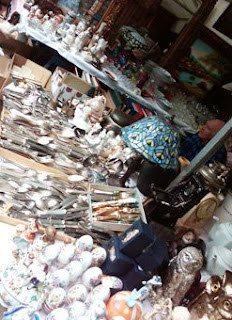 Saturday continued with a visit to the famous flea market at Strasse des 17 Juni, near the S-bahn station at Tiergarten. Billed as Berlin’s biggest and best, it had a lot to live up to. And meet it, this place did. Four long avenues of stalls selling all manner of merchandise offer something for every one, dating from the 18th century to sometime last year. Prices are all negotiable, but be polite, as a demand from a tourist that is perceived as rude will only end up with the seller clamming up completely. I saw it happen!
My two tips for this superb market are to look out for Turkish stand holders, who seemed to have the best stuff, and also to make sure you leave time to look through the book stands. There were plenty of incredibly good reference books for sale amidst the many on militaria. Throwing cares of the size of hand luggage to the wind, I bought what I consider to be a highly exciting object. The quality is very high and it’s not something I can put my finger on. I even asked a fellow glass expert, and he had no idea but agreed with me that it really is very good. More on that one later
Desperately in need of some lunch, some four hours after I should have had it, I caught the S-bahn into east Berlin, only to be derailed again by a fantastically interesting shop called Fundus Verkauf, just of Freidrichstrasse, on Behrenstrasse 14. This emporium sells costumes, furniture and even partial 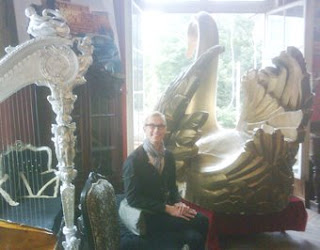 sets used in Berlin’s operas and theatre productions. A place to find something a little bit ‘different’ as a souvenir, it’s also filled with tourists giggling as they climb into a silver sequin covered spangly jumpsuit, or try an 18thC dandy’s costume on for size. Prices can be high, but it’s not surprising as every piece is entirely unique. This twice life-sized harp and enormous gilt wood swan on wheels (above) were surely essential souvenirs!
I also popped in to the Berlin Antikmarkt, in a series of railway arches under Freidrichstrasse’s rail station. I come here every time I visit the city, and always walk out empty handed. It’s not that the 30 or more stands have nothing good, in fact quite the reverse, it’s just that prices and quality are generally very high – too high for my pocket. Although the centre’s focus is very much on the ‘antique’, I always enjoy a walk around Karin Schabel’s beautiful stand where fine 20th century items are beautifully displayed. 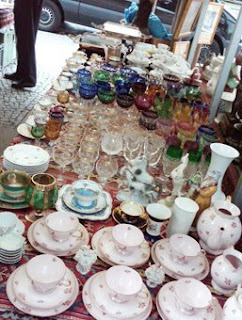 Sunday saw a visit to the considerably smaller, but no less worthwhile, flea market at Arkona platz, in the Mitte district of east Berlin. Mitte is largely populated by trendy twenty-to-forty-somethings and, as you would expect, this market caters towards their 1950s-80s retro tastes. Many stallholders put a little more effort into their displays, and vintage technology makes an appearance amongst the usual lighting, furniture, ceramics and glass.
I bought a couple of things, including a Roth Keramik vase. It’s small, and far from being the rarest piece, but for 10 euros, I could hardly leave without it. Prices for this desirable range have more than quadrupled over the past 12 months, so I think my investment is safe – this would fetch around £40 if sold online today. A cooling glass of wine and some delicious dim sum finished off a relaxing, and successful, weekend before the flight home.