The more perceptive of you will note that I haven’t bought much yet, having only spent the parsimonious sum of £14.75. Well, to be honest, I have been clutching my wallet close and saving myself for the highlight of my trip – a visit to the famed Esceri flea market.

Billed as ‘the biggest and best flea market in Central Europe’, even if it isn’t, it’s most certainly worth a visit. If you can get there, that is. It’s not as hard to find as some guide books say, but you do need to be a little intrepid as it’s quite far out of town. When I was there last in December 2005, I was somewhat suffering from the after-effects of the night before. Alas that meant I couldn’t really remember how to get there this time.
The first bit is easy. Take the M3 metro to Hatar Utca, the stop before the end of the line – don’t feel the temptation to get off at Esceri Utca, despite the name. It’s when you leave Hatar 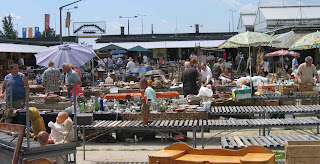 Utca station that it becomes a little difficult. You now need to catch a bus to get to the market, but which one, and from where? Buses seems to have changed since guidebooks were published. Thankfully I found some similarly confused Norwegians who spoke German and, between us, we managed to persuade a bus driver to help us. The answer is the 54, caught from the stop on the side of the road furthest away from the metro station exit, and next to a hotel. Persevere despite the rickety nature of the bus, and the fact that you seem to be going along a motorway, and get off at Fiume Utca – the driver will usually announce something unintelligible in Hungarian. As it’s the first time he’ll say anything, you’ll know where it is. Cross over the motorway using the bridge and you’re there. See – not so hard! 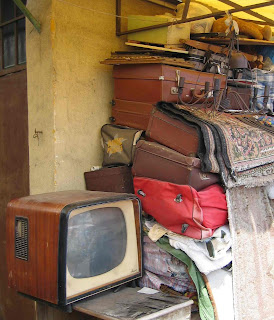 And what a treasure trove – you’ll find everything from fine ceramics and glass to literally the kitchen sink. I saw everything from a 55,000 florin (about £180) Harrachov ‘Harrtil’ glass vase to the pile of suitcases and the ancient TV in the picture. It’s a pretty large place with around 150-200 dealers who vary from those selling on pasting tables arranged in rows outside, to those in stands under cover, to those running more professional lockable shops arranged along three long under-cover avenues. You could spend hours browsing – I did! Unlike the BAV stores of the antique shops I was in yesterday, haggling is very much the order of the day. And haggle hard – really hard. They know that you’re a tourist, no matter how hard you try. I found that asking a price then politely declining, indicating that you’ll walk around and then walking away, worked. Returning some 30 minutes later often yielded a discount of nearly 50%. Organise your money before you go back, as it really isn’t right to flash your cash.
A final tip before I let you know what I bought. Saturday is the best day, and get there early – dealers start to pack up at around midday. I’m told that the earlier you get there, the better the stock. I arrived at around 11am and, although there was plenty to see, I did wonder what may have been there at 8am. 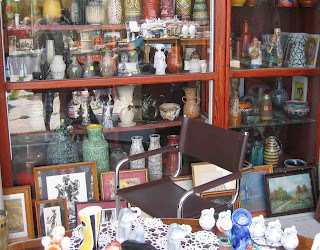 After a good few hours combing through and negotiating with a number of dealers, I decided to plump for only one piece – another 1960s Czech Zelezny Brod vase. The first price was 7,000 florins (about £23). Upon my return, I was lynched by the lively (and lovely) dealer, who wrote down a price of 5,000 florins (about £16.50). I shook my head gravely and cheekily suggested 2,000. After a few raised eyebrows and smiles, I handed over 2,500 florins (£8.25) – a pretty good discount. Both happy (I did wonder what she paid!), we shook hands and I wandered off to catch my bus back to town. Who should I find at the bus stop but the Norwegian couple I met earlier. Although they hadn’t bought anything, they did have one question. Pointing at a sentence in their guidebook, they wanted to know what a ‘Fred Astaire style top hat’ was. Despite the temptation after such a pleasant morning, I did manage to restrain myself from dancing, or singing for that matter!

One thought on “Budapest III – The Flea Market!”