Along with so many more traditional collecting areas, Carnival glass seems to have fallen largely out of fashion over the past decade. This is both a shame, as I think it’s a fascinating and visually impactful area, and a wonderful opportunity as falling demand has led to lower prices, making it much more affordable. Visiting my parents last night, I met some old lovely friends of theirs from New Zealand – Max and Christina. Lively conversation soon turned to collecting, as Christina is both a studio potter and a collector of Carnival glass amongst other areas. Trips abroad for so many of us collectors can turn into shopping trips, baggage constraints considering, and Christina was no different. She visited the excellent Battlesbridge Antiques Centre in Essex, and came back with this frilled dish to add to her collection. 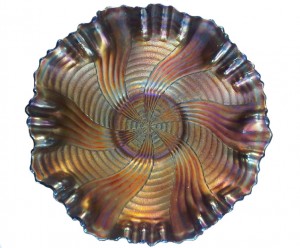 I’m usually used to seeing pretty standard marigold dishes, but this was more than that. Made by Fenton in the US, the pattern is known as ‘Ribbon Tie’, sometimes ‘Comet’, and is typically found on dishes and (rarer) plates. Introduced in 1911, it was made for a few decades in marigold, green, blue and amethyst – with red, smokey blue, and black being very rare. Christina’s example was better than most for two reasons – it was in blue glass and had an even and strong iridescence. I thought the £30 she paid was a pretty good deal.
A final interesting factoid. This type of mass-produced pressed and sprayed glass wasn’t always known as Carnival Glass. In its day, along with other purely descriptive names, it was nicknamed Poor Man’s Tiffany as it allowed people to have the fashionable iridescent look of Tiffany, Loetz and others at a much more affordable price. The ‘Carnival’ tag was only applied when collecting began during the 1960s, as so many remembered this type of glass being given away as prizes at fairs and carnivals.