With Kate & William’s wedding looming, I’ve been interviewed a fair few times over the past few weeks about what royal wedding memorabilia I like, and which ones I think will be collectable in the future. I don’t collect royal memorabilia, and I knew few people in their 20s or 30s that do, however it is an extremely popular area across the world with more mature generations, and I’m sure the commemoratives industry will go into over-drive in the next few months. 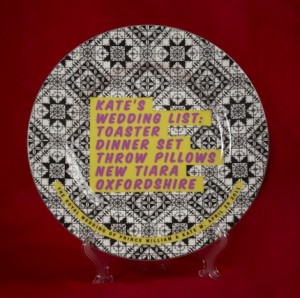 So my answer has been the only range of ceramics that I have seen and liked – a series of plates developed by contemporary design store KK Outlet, based in trendy Hoxton in east London. I think that they have put a perfectly fantastic 21st century spin on this centuries-old collecting area, producing modern, appealing and witty printed designs on traditional English made blanks. You can see three examples here, but there are more. I’m particularly fond of the example above, which shows what I’m told is the most important aspect for many – the extra day off work!
The range was meant to be available to buy in their shop today, but demand has been so great that they have been withdrawn, to be mass-produced for a new launch in early February. I was told that the current retail price is £35 per plate, but this may drop as production numbers grow. I’ve just got back from visiting the shop to put my name on a waiting list. If you want to do the same, and learn more, click here. If they’re not your cup of tea, my key guides would be to look out for fine quality, a good maker, a design that appeals to as many collectors as possible, and preferably a small limited edition. 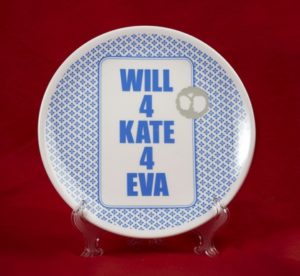 As to whether these plates will be collectable, or rise in value, in the future, who knows? It’s that supply and demand issue again – for the price to rise in the future, demand has to exceed supply. As with anything, you should only buy them if you like them. They’re a bit of fun. Whatever happens, for me they’re the best and most representative contemporary souvenir of this (inter)national event, and they most certainly get an ‘I do’ from me!