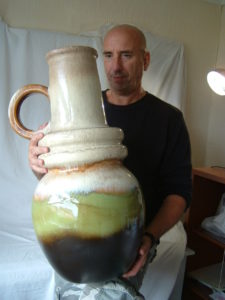 My good collector friends Kath and Eddie, who I first met at the first Fat Lava exhibition organised by Graham Cooley in 2006, are lucky people. But then they also work jolly hard at finding the most amazing pieces and researching them, so they deserve it. I have to admit to turning a rather strong shade of green when I saw Eddie’s latest discovery. You can see it above, and I think you’ll do the same! For those of you who don’t recognise it, it’s a Scheurich ‘Wien’ (Vienna) shape floor vase, designed by A. Seide. Produced both with and without a handle, this example is numbered 428-65. What makes this one both rare and highly desirable is its VAST size! They’re not particularly hard to find in smaller sizes, but huge ones such as this are very rare indeed, meaning few can have been made, and even fewer can have survived domestic accidents such as over-enthusiastic hoovering! It measures a staggering 66cm (42in) in height, and has a girth of 106cm (42in) – here’s a picture of Eddie holding it, for scale. Truly a monster! And you know the worst bit? It only cost them £40. In a top city centre retro-design store, I could easily see this having a price tag of over ten times that! Money aside, it’s a wonderful and rare thing that’s typical of West German pottery designs of the day. And yes, I’m still as green as the glaze around its middle!