It’s pretty typical for really rather good things to appear and come in just after I’ve printed a book on them. And, typically, those pieces answer a question that I hadn’t been able to solve before printing the book. In this instance it concerned Alla Moda, my new book on Italian mid-century pottery. My keen-eyed friend Kevin Graham, of Fat Lava and Pottery & Glass Forum fame, spotted this vase on etsy and told me about it. I’ve very rarely spent £29 faster!
The American seller knew that it was by Fratelli Fanciullacci from the label on the base, which has a prominent ‘FF’ logo. As readers of Alla Moda will know, the company is really rather important, and the yellow painted marks are usually another indicator of a Fanciullacci piece. But what interested me was the rest of the label, as it helps to answer what the numbers painted on the base may mean. 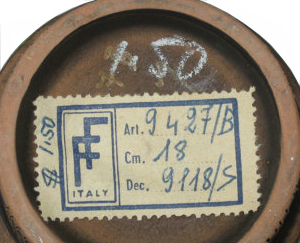 ‘Art.’ must be article, so the shape of the object. ‘Cm.’ speak for itself, and then we get to the interesting bit – ‘Dec.’, which must indicate the decor or decoration. So numbers printed on the base appear to be largely shape numbers, as 9427 has appeared in painted marks on other Fanciullacci stepped cylinder vases. Readers of my book will know that the company wasn’t consistent with its marks, but this is a good indication of their intention.
It was also interesting to note the price – $1.50 – presumably some time from the late 1950s to the 1970s. The buying power of $1.50 during this period is roughly $7-11 in today’s money, giving us some idea of the original price of this 7in (18cm) high vase. 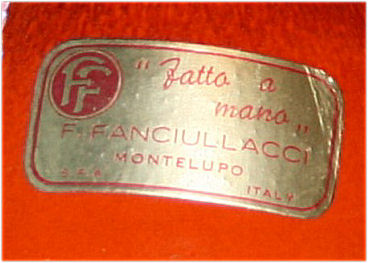