I’ve just got back from the Collectors’ Club of Great Britain Fair, run by Collect It!, the magazine I have written a monthly column for over the past six years. It was great to see so many keen collectors braving the freezing rain and winds to visit. Many of them stopped by the Miller’s stand to browse our range of books and have a friendly chat. I also joined my friends and colleagues Judith Miller and Eric Knowles in giving valuations of much-loved antiques and collectables brought in from homes across the country. A particular highlight was finding a late 1930s Stevens & Williams ‘Rainbow’ cut glass vase amongst a small collection of glass brought in by a young collector. He had recently bought it at a car boot sale for £8, which is a complete bargain considering I think it’s worth anything from £300-500! Well done Joe! Although he didn’t know what it was at the time, he clearly has a great eye for spotting quality. 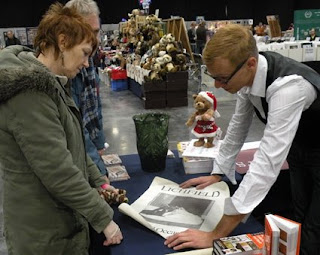 Other items included a late 19thC carved and jointed wood jointed ‘smallest doll in the world’, contained in a miniature wooden egg, which Judith valued at £80-100, and the poster I’m looking at here. It was produced in 1986 to promote an exhibition of photographs by Lord Lichfield at the Ritz in London. It featured the famous photograph of Diana, Princess of Wales in her wedding dress looking adoringly up at her new husband, and was also signed by Lichfield himself. It would have been of interest, and some value, had it not been so creased and damaged. As it stands, it’s value lies in the owner’s memories of meeting Lichfield and seeing the exhibition.
So how did I come to have a drink with Darth Vader? Also attending the event were a number of stars including Colin Baker (Dr Who), Kenny Baker (R2-D2) and the imposing David Prowse, who played Darth Vader. At drinks after the first day of the fair, I enjoyed a long and entertaining chat with David. After discussing his days as Darth Vader and the ‘Green Cross Code’ man, he told me about his career as a singer which varies from rock to Howard Keel. Unlike the character he played, David really is one of the most genuinely charming, easy going and friendly people I have been lucky enough to meet in years.