This weekend saw a series of special events at Isle of Wight Studio Glass, nestled under the cliffs near Ventnor. I had been invited down to sign copies of my book, and to chat to collectors about pieces from their collections. And collectors and glass fans certainly turned up, creating a buzzy atmosphere that was made especially festive with complimentary homemade mince pies and mulled wine.
One special visitor, who popped in purely by chance, was Angus MacDonald who can be seen with Elizabeth Harris and I in the photograph above. Angus was one of the two first glassmakers employed by the studio’s founder, Michael Harris, in 1972. It was fascinating to be able to talk to him about his memories of the very earliest days of the studio, and of working with Michael. Angus left the studio in 1978 and, although he doesn’t make glass any more, he still handles it in his role as owner of CART, a specialist in the transportation and storage of fine art and crafts. 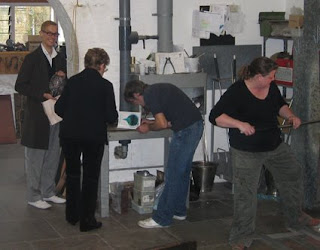 Visitors also enjoyed demonstrations by Timothy Harris, who produced a special range for the weekend. These comprised small but perfectly formed miniature, and enormous over-sized, versions of his popular ‘The Seasons’ series. Winter, with its dramatic network of branches set against a snowy background was particularly striking – both to behold as a finished piece and to watch being made.
Showing the increasing interest from collectors in Isle of Wight Studio Glass, a large number of my books were sold – each being signed and dedicated by Elizabeth & Timothy Harris and I. I almost felt guilty about the amount of times I had to disturb Tim to ask for his ‘paw print’ whilst he was making glass. Thankfully he had his skilled assistant, Clare Hocking de Noffski, on hand to take over. 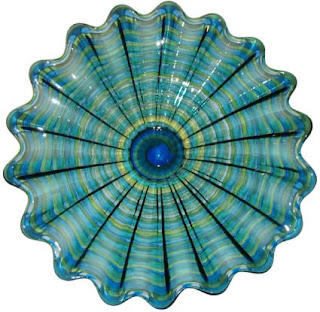 A night at the new and ultra-cool Hambrough hotel in Ventnor, run by Michelin starred chef Robert Thompson, rounded off a wonderfully enjoyable and relaxing weekend. The food is amongst the best I have had, and watch out for the special limited edition platters (left) designed and made by Timothy Harris that greet diners as they enter the restaurant.