I love finding a piece with its original label or sticker still attached, as it can yield a lot of useful information, especially if the piece is otherwise unmarked. Most labels were washed off, or otherwise removed, by the original owner when they got home, so survivors are scarce. Obviously, the first indication a label gives is who made, designed, distributed, or retailed a piece. It’s important to be able to distinguish between the four, and it’s not always easy. A quick google search will often help you or, better, look in a trusted reference book. 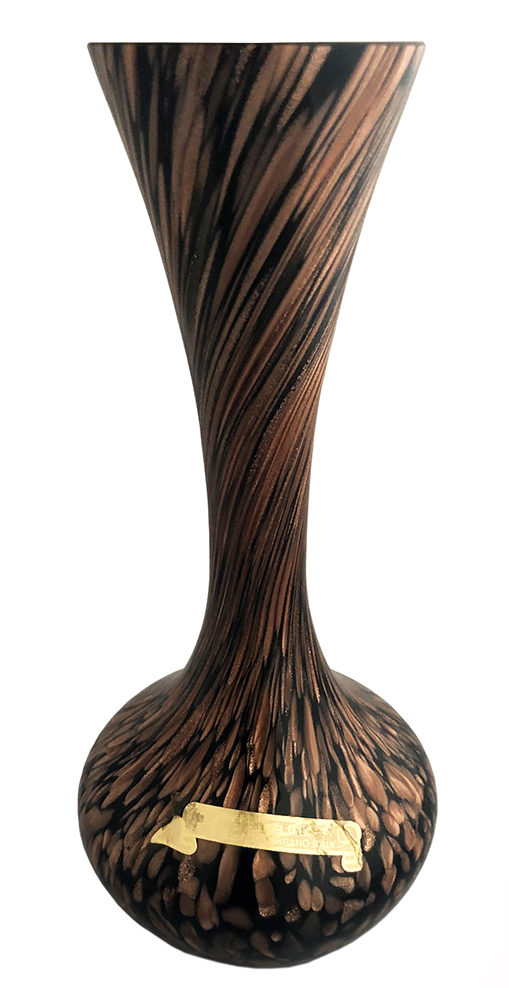 In the past two weeks I’ve come across two things with labels which I had to buy. The first is a black Murano glass vase covered in sparkling ‘avventurine‘ coppery-gold mottles. It was made by rolling a partially-blown gob of black glass (actually very colour-heavy purple glass) in chips of colourless glass containing copper powder, and then applying a very thin layer of colourless glass over the top and blowing the whole into a mould. They’re not rare – if you go looking, you’ll find one pretty quickly, be it a vase, ashtray or a bowl. Prices range from a couple of pounds up to around £100-150 for extremely large examples.

I’ve always wondered who made them and the scuffed embossed gilt label on my new acquisition tells me that it was made by V. Nason & C. on Murano and is from their ‘AVVENTURINA’ range. A number of companies used the name Nason, but V. Nason & C. appears to have been founded by Vincenzo Nason in 1967 and closed c2000. It’s best known for its opaline glass ands range of animal sculptures, but also produced this style of glass in large quantities in many different shapes. It may be related a company with the same name founded in 1934 by another Vincenzo Nason (died 1948), which was also known for its avventurine glass. Also bear in mind that copying was rife on Murano during the postwar period, so this style may have been made by other companies too. 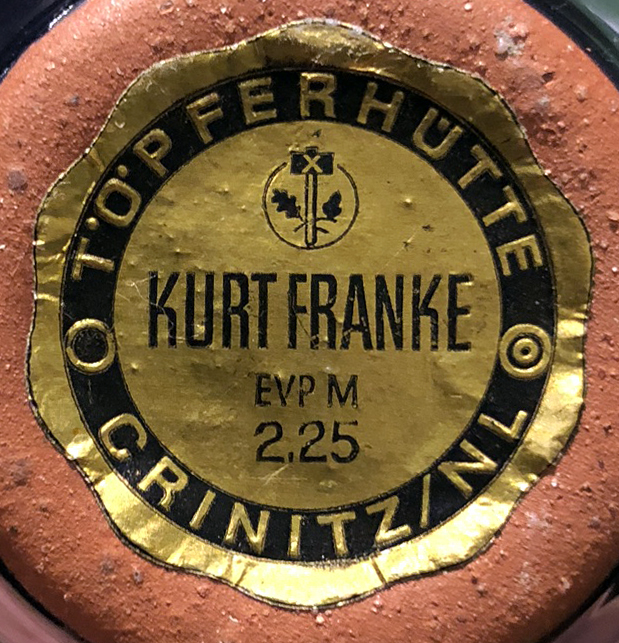 The label on the second piece is arguably more interesting, and made me think on. Costing a 8 Euros from the brilliant Arkona Platz market in Berlin, I rather liked its compact shape twinned with the good quality blue veined, dripped glaze. At only 11cm (4.3in) high, it’s a lovely addition to my collection of miniature things. Turning it over revealed a fascinating label which my (German) partner decoded: 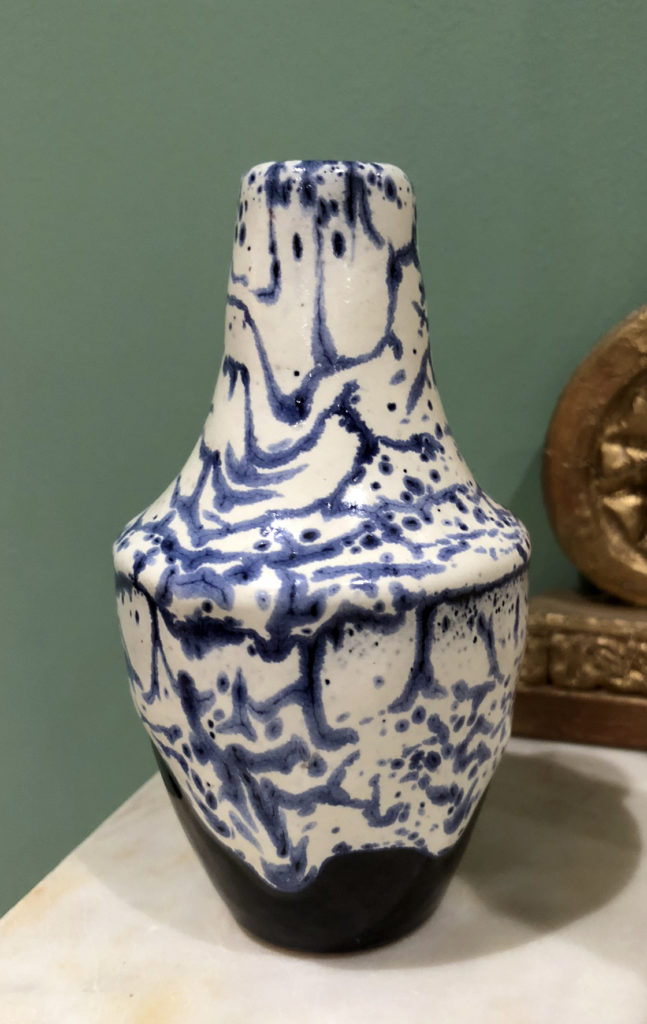 So that got me thinking…looking on the internet at comparative prices for products in 1970s East Germany allowed me to position the price of the vase in a real life context:

Looking wider, the average monthly income of a 4 person household family in East Germany in 1981 was 1,700 Marks (The average monthly net income for the same in the UK today, after tax, is around £2,000 per month). Money was pretty tight for 1970s East German families, as was supply of many goods. Anything considered ‘basic’ or ‘essential’ was inexpensive, but anything deemed vaguely luxurious or unecessary for day-to-day living was expensive, and prices remained pretty similar throughout Communist rule in East Germany from 1945-89.

So my diminuitive vase would have been a purchase most 1970s East German families would have thought a little about, especially as it’s not the most practical size. It’s a frippery, really, and almost a luxury. Forgo the two large beers, light lunch, of packet of cigarettes if you want it. To some of us, it’s an obvious thing to do but for most ‘normal’ people, especially there and back then, it’s far from that. Coming back to today, I paid €8 (£7.13 or $9.10) in Arkona Platz in Berlin in 2018…indicating that this little vase has pretty much kept its value on a relative basis.
All interesting stuff – there really is a lot in a label!!