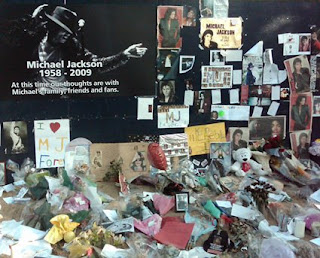 The grateful guest of a law firm to see Madonna perform at the 02 arena in London on Saturday night, I came across this poignant tribute to the undisputed ‘King of Pop’. Scheduled to perform some 50 concerts at the arena during July and August, it’s possible that the mental and physical strain these caused contributed to his untimely and tragic death.
Over the past few days, a fair number of people have asked me, or made comments, about the value of Jackson memorabilia and merchandise. A little ghoulish maybe, but I guess the interest is understandable.
Every case needs to be treated differently, particularly as values are likely to be falsely inflated for a few months by (arguably even more ghoulish) speculators. As such, I’d be inclined to wait for a few months before buying that must-have piece of memorabilia, as you may find it more affordable after some of the media hype has died down. 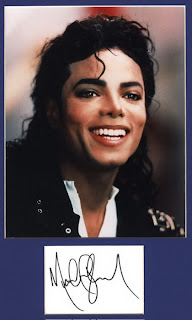 I also think that, as ever, the same core rules to collecting rock & pop memorabilia apply. Mass-produced, poorly made commemorative objects are far less likely to rise in value than something licensed and more special, or even something owned or used by the man himself. It sounds obvious, but you’d be surprised how many people expect their old copy of ‘Bad’ to contribute to the mortgage. It won’t – Jackson was the commercial success he was because he sold millions of records, and yours is just one of those many millions. The same goes for much of the raft of commemorative memorabilia that was produced during his career. To state the obvious, for something to rise in value, demand has to outstrip supply.
Also consider items that visually represent the man at his best – those that show him in characteristic pose, looking his best and from his best-loved songs. Think ‘Thriller’, ‘Bad’ and the like over ‘Remember The Time’, for example. Also keep a close eye on ‘limitless editions‘ – the smaller the size of the limited edition is, the more it’s likely to rise in value.
If you’re wealthy enough to invest in something directly connected to the singer, make sure the provenance (the story behind it that proves what it is) is cast iron. A few weeks ago, I had the good fortune to handle one of the famous fedora hats he wore in ‘Billy Jean’. It’s part of an iconic look that could only perhaps be beaten by a sequined jacket, red Thriller outfit, or a glove. Acquired from a central London auction house, its provenance was cast iron, and it was also signed by Jackson. As I carefully handled it, little did I know that the man who flicked its brim up in front of millions would be dead mere weeks later.