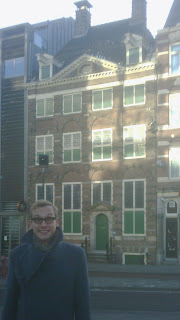 After an extremely busy, but very successful and highly enjoyable 2009, I spent the first few days of my Christmas break in a near catatonic state. Fully recovered, new year was quite different however, with a five day trip to celebrate the occasion in Amsterdam.
First stops for any self-respecting art, antiques and collectables fiend have to be the wealth of fabulous museums in the city. All are within easy walking distance of each other. The Rijksmuseum yielded its usual eye-popping highlights, as it is largely closed until later in 2010, but the Stedelijk was sadly completely closed for what looks like an amazing renovation. My personal highlight was the Rembrandt House museum, (above) where I spent a happy four hours surveying their exhibition on ‘Rembrandt Reversed’. Here, his famous etching were shown reversed, revealing the design, effects and movement Rembrandt would have seen as he etched the copper plate by hand. Although some of the revelations were truly that, I wasn’t convinced by all of it, and wondered if the reversal of the design was one of the reasons why his etchings are so captivating – and this was intended by the master to catch and hold the inquisitive and critical eye. 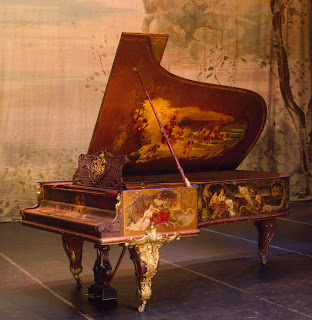 On to the Museum van Loon, a private palace to the Rococo style, and then the new Hermitage branch based in the city. Another five hours passed by in moments, as we surveyed the magnificence and grandeur of their inaugural exhibition on the Russian court at the turn of the 20th century. It’s expensive to visit, but well worth the money as there’s something here for anyone who loves brilliant ballgowns, cunning costumes and other fabulous finery. The ‘treasures’ room, filled with works by Fabergé and his contemporaries, was particularly unforgettable – most notably a solid lapis lazuli ewer embellished with gold and enamel, and the Rococo piano above. 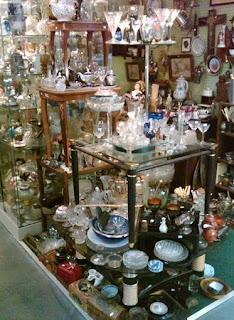 And then antiques and collectables – with Dutch traders much more in evidence at major fairs this past year, I had high hopes. First stop was the famous De Looier antiques centre (left) on Elandsgracht, which is the largest market in the Netherlands. It didn’t disappoint, as the stand shown here indicates – and that’s just one of some 80 stands and 100 cabinets! Interesting to me was the fact that there was much more that could be classified ‘antique’ rather than ‘modern’ since my last visit in 2005. My only real criticism of the place is that it is very hard to navigate. My internal GPS is very good, but I got lost twice! Still, not a bad place to lose oneself in, I guess. With very little Fat Lava seen, look out for Mobach pottery – one to watch for the future? 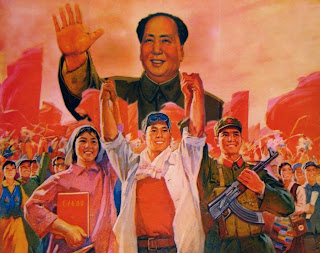 The 9 streets, indicated by their overhead street lighting, provide many more places to hunt – and the many fashion shops may provide entertainment for a partner less interested in vintage or retro. In particular I’d recommend FiftiesSixties on ReeStraat for retro lamps and vintage toasters (!), the fabulous Brilmuseum of spectacles (even though the shop didn’t have any of my favourite shape!), the nameless shop next door that specialises in amazing and often hilarious 1950s-70s kitsch, and Roerende Zaken, with its wide range of sought-after 20thC design. A newly discovered highlight was the ‘The Totalitarian Art Gallery‘, on the Singel canal, with its powerful totalitarian artworks and decorative arts from 1930s-70s Germany, USSR and China. Prices were competitive, and everything was original – a rarity today. As to what is surely the future of bookshops, and indeed publishing in general, check out Mendo on Berenstraat, voted one of the 200 best designed shops in the world.
After all this, good food and drink is needed to recover. Quite apart from the enormously expensive, but also enormously luxurious and entertaining, original Supper Club, we found the French inspired Café George on Leidsegracht to be a lively and delicious mainstay. Thankfully, Amsterdam is small enough to walk easily and quickly between most locations – it’s amazing what you can fit in to five days!