Having seen so many prehistoric, neolithic and paleolithic designs on modern ceramics and glass, I’ve often wondered how much these were inspired and driven by the discovery of some caves. In Summer 1940, four French teenagers out walking their dog in the Dordogne discovered a cave, the walls of which were covered with prehistoric cave paintings of animals and hunting scenes.
Archaeologists soon found that this was just the start – there was a whole network of caves, all with perfectly preserved prehistoric art.
T 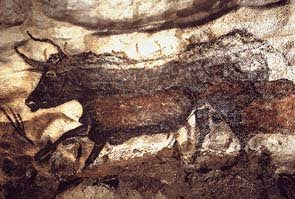 he sleepy French village of Lascaux became world famous instantly. In fact, by 1955, over 1,200 visitors arrived every day to see this ancient wonder, dating back some 16,000 years. The caves were closed in 1963, with a replica opening nearby in 1983. Much local pottery is decorated with similar motifs, and mades great souvenirs. But I think the inspiration spread further than tourist wares. Consider Eric Hoglund’s designs for Boda, some Vallauris patterns, and particularly this 1960s-70s West German Scheurich ‘Montignac’ range vase, which really does resemble the original cave art. And to tie this example in even closer, ‘Montignac’ is the nearest town to Lascaux.