At least that was the question that I was asked by some confused colleagues the Friday morning before leaving! Well if you don’t know already, Riga is the capital of Latvia, one of the Baltic states. I have to admit to a personal fascination with these ex-Communist states that curve northwards around the Baltic towards St Petersburg. Having enjoyed Tallinn in Estonia last year, I was keen to experience more. There’s just something about the combination of ancient and Communist architecture, the waves of new business that sprang up after the fall of Communism and, of course, the potential for all manner of new discoveries in the Decorative Arts. Much of what happened behind the Iron Curtain in the second half of the 20thC is a mystery to us. One I’m keen to know more about. 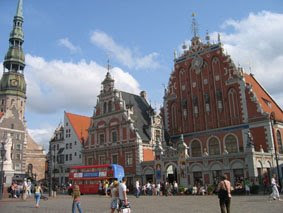 Like Tallinn, Riga is riding on a wave of new money and confidence. Okay, it’s not as wealthy as Estonia, but it’s still arguably doing much better than it was under Communist rule. Tourists are also beginning to flock there, although (thankfully) the ‘Stag party’ count isn’t quite as high as it is for Prague. I’m happy to report that there’s a surprisingly large number of surprisingly good restaurants. The banker I were entertained and well fed at Vincents, in the embassy district of town. Not ab inexpensive night out by any means, but well worth it for the spectacle of the waiter using liquid nitrogen to make a divinely delicious fresh berry sorbet palette cleanser! 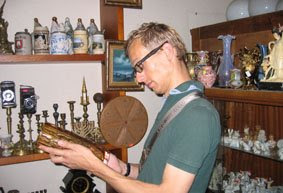 I wasn’t expecting much in the way of antique and collectables shops, especially after my research the evening before leaving yielded only a few results. However, I was pleasantly surprised. Most shops carry all manner of goods, from absolute junk to Soviet relics to religious art to a broad mix of homewares, some good and many very, very bad indeed! However they make ideal rummaging grounds, and rummage I did. One of the best, if you can bear the 40 minute walk out of the centre and almost into the ‘burbs is ‘Retro A’ at Tallinas 54. As you can see from the image, I found and a rather interesting vase which may or may not be Czech. ‘Galerija’ at Dzirnavu 53, ‘Antikvariats’ at Avotu 31′, and ‘Antikvariats del Arte’ at Barona 16-18 are also well worth a visit. All are outside of the touristy but pretty Old Town, and the latter had an interesting display of vintage fashion including handbags and shoes that was strongly redolent of Art Deco opulence. Prices aren’t bargain basement, but it is worth negotiating – albeit very politely. Check opening hours as best you can before you go, and don’t save your cash for the truly vast markets inside the old Zeppelin halls as these focus on fresh meat, fruit and vegetables.