Although it’s not something I specifically collect, I’ve always had a fondness for early technology. It must have developed out of working with scientific and optical instruments when I worked at Bonhams and Sotheby’s. If I see something that tickles my fancy and I can afford it, I’ll add it to one of my many different collections.
Passing through Amsterdam just before Christmas, the Banker and I stopped by Roerende-Zaken in the famous ‘9 Streets’. As we were just about to leave (unusually) empty-handed, we spotted this portable transistor radio in a cabinet. It wasn’t the radio itself that stopped us in our tracks, but the name – Internet.
Transistor radios like this were first released in 1954, and were produced in vast quantities during the 1960s & 70s. This example probably dates from the late-1960s to around 1970, considering the design of the box. This is an extremely interesting date when the name is considered.
Nobody knows exactly when the word ‘internet’ was first used, or who coined it, but it appears to have been from 1883 onwards, when it was used as an adjective or verb to describe interconnected motions. It was seemingly first used as a noun in 1977, when demonstrations of the early ARPAD and SATNET networks were held by pioneers Vint Cerf and Bob Kahn. It wasn’t commonly used by the likes of you and I until the late-1990s, nearly a decade after Tim Berners-Lee developed the thing it actually indicates. 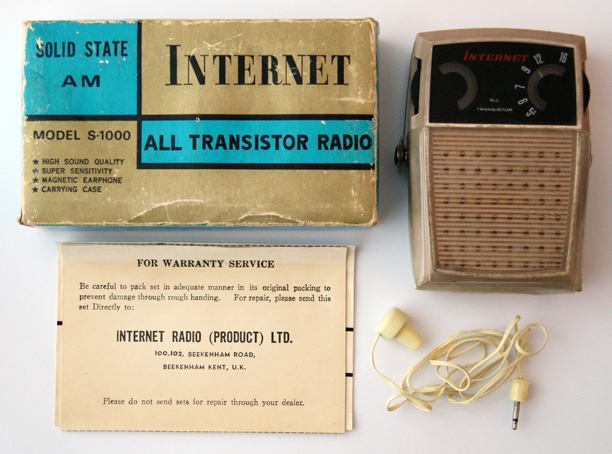 So, this makes this radio one of the very first proper and public uses of the word internet, and one that predates the development of world-changing thing itself!
As we sat over a warming glass of red wine, the Banker and I mused over whether the (now long-gone) radio company who imported it ever trademarked or copyrighted the word. After all, it’s in their name ‘Internet Radio Product Ltd’ too. Can you imagine if they did, and if one could buy the rights to the name? Of course, it’s a ridiculous thought and quite unenforceable, but it’s somewhat amusing!
But, looking again, there’s even more connection with today’s internet age. The cream case, flat upright format, rounded corners, and ‘screen’-like black tuning display all recall Jonathan Ive’s now legendary design for the iPod. The Internet radio even has white earphones! I’m not accusing Ive of copying it of course, but the resemblance is striking and I wonder if these mid-century portable transistor radios (which often look alike) were an influence on his design. 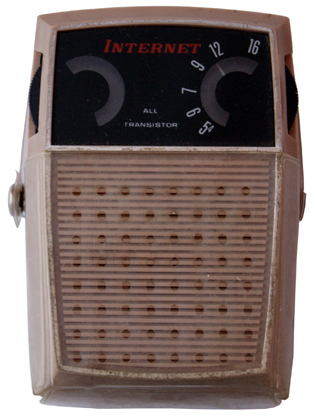 I was also very fond of the fact that it was complete with its instructions, warranty card, plastic protection pouch, earphone and box. These revealed that the company imported the radio from Hong Kong, and were based in Beckenham in Kent. It seems even back then Chinese imports were inaccurate, as the town is spelt ‘Beekenham’ on the warranty card! The box is a little dirty and battered, so the €20 (£17/$27) price tag seemed very fair to me. It’s not something I’d sell, I just like it.
I’ve always thought that early computers, games, calculators and digital electronics should be more sought-after than they are in general. All it would take is for some of today’s ‘tech billionaires’ such as Mark Zuckerberg of Facebook, Pierre Omidyar of eBay, or Bill Gates of Microsoft to start collecting. Despite the fact that they seemingly don’t, one of the very first Apple computers sold for £320,000 at auction in November 2012, against an original (and still high) cost of $666.66 back in 1976. Given its incredibly early use of one of the most commonly used and important words across the globe today, I wonder what my Internet transistor radio might fetch in the future?! 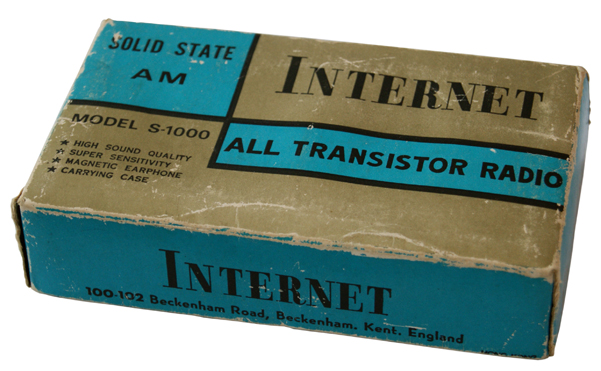 4 thoughts on “Was ‘Internet’ First Used For A Transistor Radio?”