With a bit of Polish blood flowing through my veins, I’ve always been fond of decorative arts produced in the former Eastern Block. Amongst my favourite areas are postwar avant garde Czechoslovakian and Polish film and event posters. Over the past two decades, those from the former country have become widely popular and highly desirable meaning the best pieces can cost a pretty penny – or thousands of them! Polish posters can offer better value for money. For example, Wiktor Gorka’s iconic ‘Kabaret’ poster is often considered amongst the best, but originals can still be found for around £500-600.
There are many artists to consider, most of them mouthfuls, from Franciszek Starowieyski to Lucjan Jagodzinski. I’m particularly fond of Waldemar Swierzy, and his name was brought to my mind again recently after I stumbled across this handsome design by him in a country antique shop. The circus (or ‘Cyrk’ in Polish) was a popular form of entertainment in Poland right up to the fall of the Iron Curtain, and numerous artists produced posters to market the event from 1962 onwards. 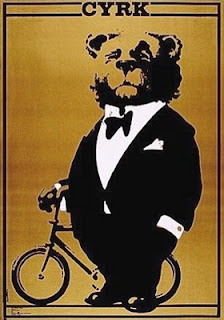 Styles and inspirations were diverse, and there’s something here for everyone within this smorgasbord of avant garde design. An award-winning designer, Swierzy produced a large number of different designs across his career. I think his star is still to rise, but the market is still young and defining itself. The poster I saw is considered by some to be very rare and was priced at just under £200 (attractively framed), but examples have sold for over double that, undoubtedly due to its appealing and decorative nature that has a strong whiff of the Art Nouveau about it. Flicking through a Christie’s catalogue today and seeing an Edward McKnight Kauffer newspaper poster valued at £20,000-30,000 made me feel that the mileage still to go with these posters is rather extensive. It’s long term rather than short term. But if you like the look and sound of this area, you can read more here and here.