As regular readers of my blog will know, I buy a lot of pictures and prints. I began buying them at school, when I was 15, and they’re all still surrounding me, spread around our home. And I honestly like all of them as much today as I did when I bought them. Whether or not this is true for one particular purchase, I can’t still tell you – yet. But, bizarre and slightly horrid as it looks, I trust my gut instinct… 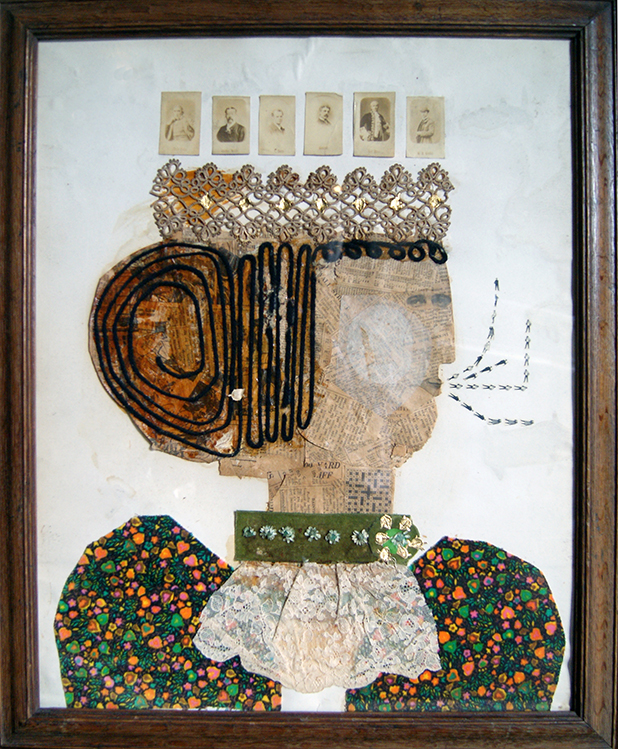 I was reminded of it the other day when the marvellous Gail McCleod from Antiques News & Fairs came to our home for a working lunch. With over 30 years experience in the business – particularly with decorative antiques – she was quite taken with it. I also trust her, and her eye, implicitly.
First off, as you can see, there can only be one. For so many reasons, there must only be one! If there are any more, I’d love to know what they look like. It’s not signed (some may say “Why would you own up to making it?!“) and I have no idea who made it, or why. For all I know it could be a school project but, in a way, I don’t care much and I also don’t think it is – there’s far too much work in it for a start. When I saw it, I laughed at it, loved it, and had to own it. Framed in an early 20thC oak frame, it’s ready to hang on the wall, despite its slightly tatty state. Let’s take a closer look to see what I saw when I bought it from Acorn Antiques & Collectables a fair few years ago.

There seems to be no single theme, with inspiration and style crossing the centuries and execution done in the manner of a primary school child meets a Victorian scrap booker meets a découpage artist. With a bit of the opening credits of Monty Python’s Flying Circus thrown in for good measure. But I think it’s more than that. It has an almost ‘folk art’ appeal and someone obviously spent quite some time amassing it all and putting it together. Quite what it is, why it or was done what it means, I don’t know. Any ideas?!