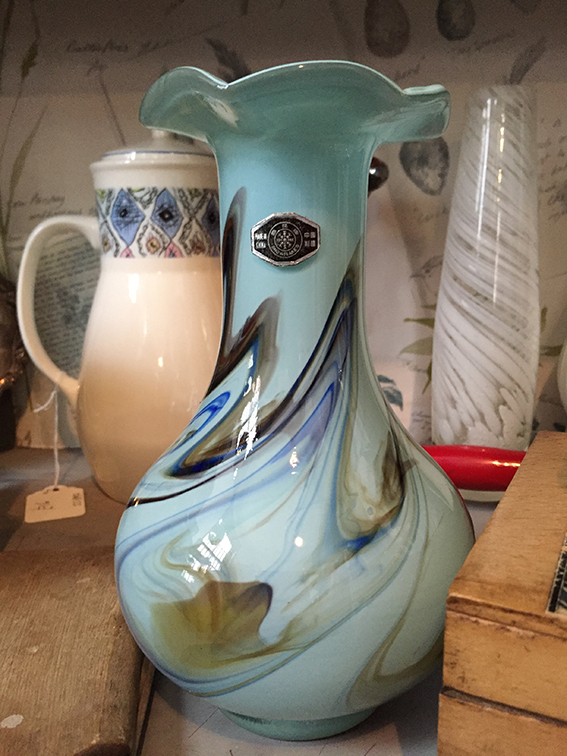 Browsing around the excellent and huge Hopkinson Vintage, Antiques & Art Centre just by Nottingham’s station after doing a NADFAS lecture, I stumbled upon this vase. I was delighted as it had a label – something I’ve been looking for for ages.
When sold on eBay or in countless fairs, shops and antiques centres across Europe and US, they are always either labelled ‘Murano Glass’, or ‘Italian Glass’, indicating factories based in Empoli near Florence. None of this is true, but I needed to find one with a label to be able to prove it and write a blog post.
As the original silver and black foil label on the example I found clearly indicates (below), they were in fact made in China. Stop gasping – and relax. Although most collectors eschew and pass over Chinese glass, most of which is derivative and poor quality, I think these are worthy of consideration. 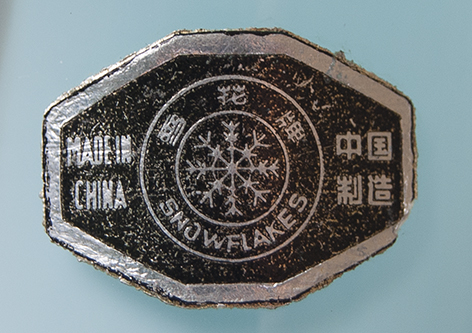 Marketed under the brand Snowflakes, this diverse range was made by The Dalian Glass Co. Ltd  which is one of many glass factories on the Dalian headland known as the ‘crystal coast’. These factories literally mass-produce all types of glass, from window glass to mirrors, scientific glass, and decorative glass. This range seems to have been produced from the 1950s until at least the 1980s, judging by the style of label and reports from collectors whose parents or relatives remembered buying or being given examples. The long period of production is also supported by the vast quantities found out there in the marketplace.
Acknowledging Peking Glass as a distinct area, glass was never ‘big’ in China, arguably until the mid-20thC, primarily as porcelain was far more important to them as a functional, decorative, and export product. After all, they ‘invented’ it in the Han Dynasty period (206BC-220AD). Jade also had an effect, and some Chinese glass mimics this desired stone.
Although China began exporting glass in quantity to the West in the early 1920s, it wasn’t until after World War Two that it became big business. This range thus represents one of the first decorative ranges designed in, and exported by, a Chinese factory to go ‘big time’ in the West. Regardless of what we glass collectors and lovers think about Chinese glass today, I think that makes it significant.

For so much to have been sold over a roughly 30 year period indicates that it was successful, and it appears to have been affordable and inexpensive, as well as practical. The general style is very clearly taken from mid-century modern Italian glass, hence the common mis-attributions. The vibrant red and yellow range would certainly have struck a chord during the 1960s & 70s, and the pastel colours would have been popular during the 1950s, and probably again during the 1980s. Even today, a well-arranged collection looks visually stunning and, as we all know, the market is moving ever more towards the decorative end of the spectrum. And a collection won’t cost a million dollars – examples can be found from 50p to £30 or so, depending on location, size, shape and colour.
The quality is, by-and-large, pretty good and there are plenty of shapes and colourways to be found.  They weren’t blown by hand, and were made using moulds and factory production techniques. Despite this, the applied smoke-like swirls, spots, and patches are unique on each and every example.
They’re also instantly recognisable once you’ve seen a few. Body colours include pastel pink, light blue, creamy white, green, and a particularly common yellow with red rims. Swirls, spots and patches are often in brown and blue, but sometimes also include yellow, green, red, and white. 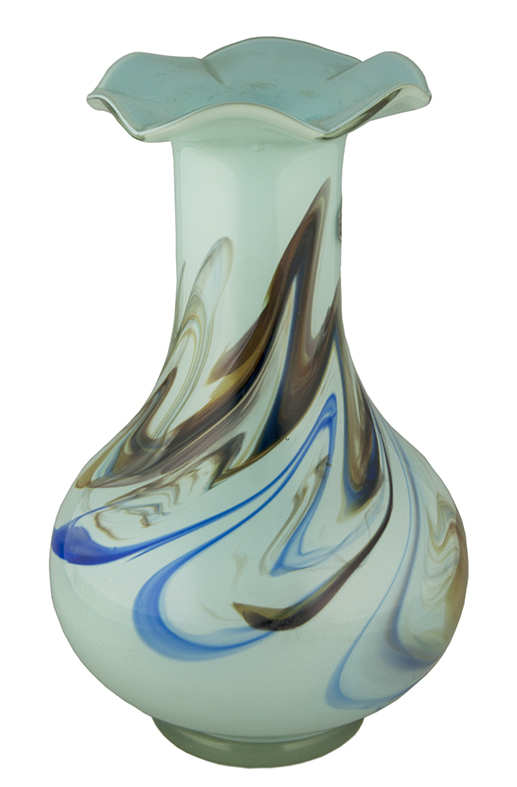 All are over an opaque white core, with the thickness of the coloured layer giving the strength of the colour. Rims are often crimped, and the bodies are cased in colourless glass, making three layers, and sometimes have applied colourless handles or feet. Vases are most commonly found, although water/lemonade sets of drinking glasses and a matching jug or carafe were also produced. My vase measures 7.5in (17.5cm) high and my next quest will not be to build a collection, but to find the very largest one I can. Let me know if have a truly gigantic one for sale…
In the meantime, I’ve created a small gallery culled from the internet of some of the different shapes and colours out there. I’m sure there are more, but I wanted to give a flavour as to the size and scope of what I see as an interesting and worthwhile range, despite the intially off-putting ‘Chinese’ label.