I was instantly transported back to my childhood. And it made me smile. Relatively late in the day at today’s packed Antiques Roadshow, a very kind and friendly couple showed me something they had bought for their children back in the early 1970s – a Corgi Magic Roundabout Playground set. I was never lucky enough to own one of these but, then again, I was rather bemused (perturbed even?) by Zebedee, much as I loved Dougal and Ermintrude.

These sets are eye-wateringly rare today. Costing £13, they were expensive at the time and playtime led them to become worn, damaged, or broken up – or all of that. So, condition and completeness are the key criteria for those that survived. In truly superb and complete condition, these sets can fetch anything from £600 upwards – nostalgia is a key driver in so many collecting areas, and never more so than with classic TV or film memorabilia. Although complete and clearly looked after, this set did show signs of play-wear. The box had faded and discoloured after a few decades in the loft, and it was somewhat battered, broken and torn in places. Inside, although the stickers were all present, they were a little faded. The all-important Magic Roundabout was cracked, and the finish on many of the figures had been worn. A few of the cylindrical boxes to hold the figures were also missing. Those that were there were a little tired or torn. I may sound picky, but these things matter to collectors – and also affect value. 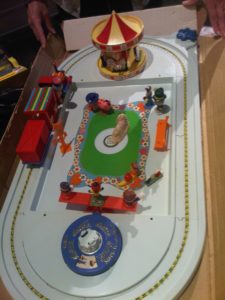 But, lo and behold, turning the dial still produced the unforgettable music that almost made a nostalgic tear form in my eye. Turning another made the train move around. How I loved – and love – the Magic Roundabout! And so did the owners as they set the scene up for me, carefully placing each character into position.
A clever and keen-eyed sort, they had seen a newspaper article that valued them at £600-1,000. And rightly so. But in this condition, I’d expect them to receive around £100-150 after costs if they sold it at auction – and I’d like to think that they’d get a bit more, to be honest. Their response was already clear to me – the care that they took in setting up and packing up the scene showed that they loved this Magic Roundabout set today just as much as their children did at the time. Happy memories all round.