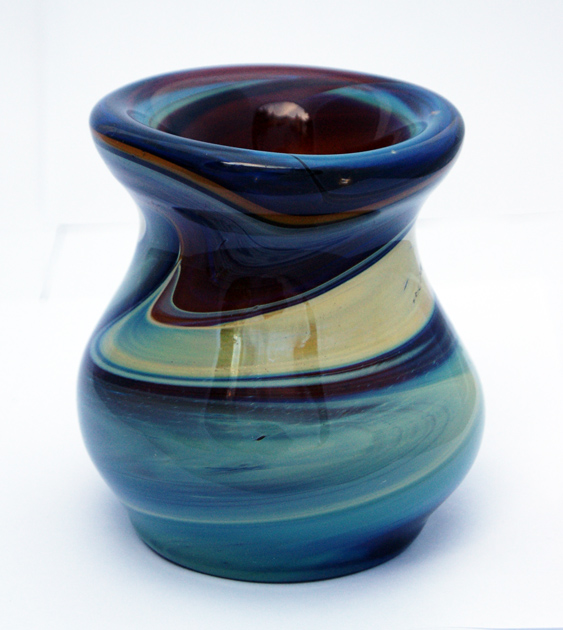 Since writing my book on Mdina Glass & Isle of Wight Studio Glass (which is now out of print), I’ve encountered a number of vases with coloured swirly patterning like this. People have brought them to me at BBC Antiques Roadshows and other events to ask whether they’re Mdina Glass, or which range of Isle of Wight Studio Glass they are from. Although I could confirm without any doubt that they were not made at either company, I didn’t know who did make them, or when or where they were made.
This Summer, the Banker and I decided to holiday in the heat of Israel. While we were there, we walked across the border (legally, of course) into Jordan to visit Petra, which is rightly one of the New Seven Wonders of the World. Wandering around the town the night before, I stopped dead in my tracks in front of a display of many hundreds of vases in different shapes and sizes – but all with this characteristic swirly colouring. 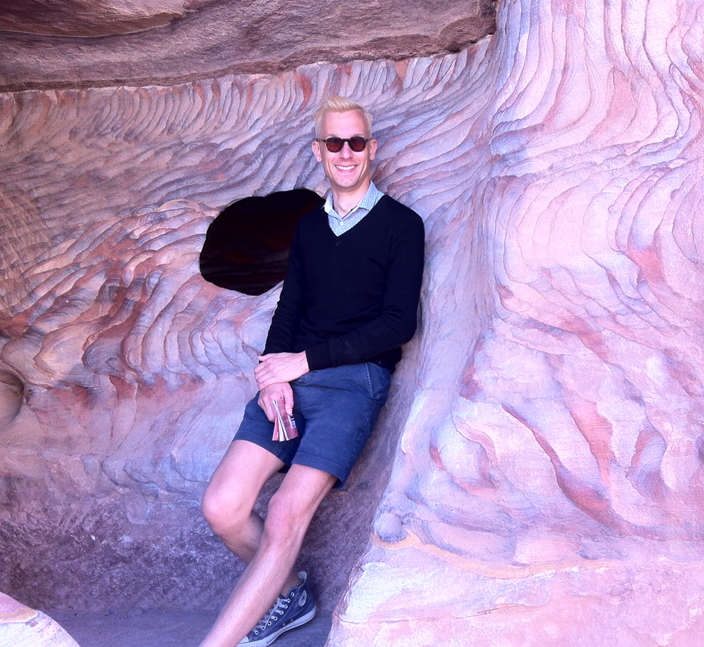 Even though I was meant to be taking a break, and it caused even more sighs than usual from the Banker, I had to know more. Aimon the young shop assistant explained that the glass was made locally, and it was made to echo the colours and patterns in the swirling sandstone in and around the remote mountainous valley Petra is located in. The photo on the right shows me in front of the type of rock he was talking about – albeit it a little bleached out colour-wise by the strong Jordanian midday sun. He added that the glass contained real sand (!!) and that the colours changed in the light as he waved it manically in front of a glowing lantern.
We chatted a little more, and the sales pitch went on. He knew the difference between the mould blown and free-blown pieces, with the latter being more expensive, thicker and heavier in weight. The mould blown pieces had shiny bases whilst those that had been blown and formed by hand had roughly ground flat bases a little like sandpaper (see below left). As well as the difference in colouring, both these aspects had always told me that they could not have been made at either the Mdina or Isle of Wight Studio Glass factories, as they didn’t use base finishes like this, except in for one or two pieces. I have no idea if he was telling the truth – for all I know they could be being made in Eastern Europe (my previous guess when asked) or even the Far East. However, I haven’t seen them being sold new anywhere else on my travels yet, and hundreds of thousands of tourists visit Petra each year, making the amount I’ve been shown in the UK perfectly possible as tourists’ souvenirs, even if they were sold or passed on by the original buyer. 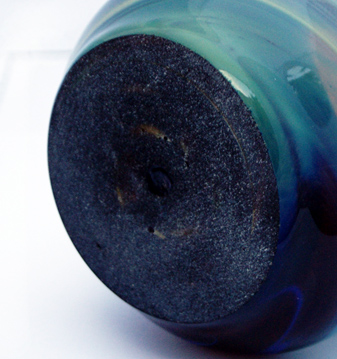 I preferred the standard shiny surfaces rather than the acid- or sand-blasted matte finished surface that was also available. I rather fell in love with the small chunky vase above and a larger bottle (seen below in the gallery).  The latter was too thin and fragile to transport home and my luggage was already tightly packed. So I opted for the former. Unsurprisingly, I was told that I had chosen one of the best pieces in the shop, due to the colours and swirling pattern, and the price was around £35. I bartered him down to around £28 and he threw in a small painted resin figure of a Bedouin as he told me I looked like his first love…! As if.
Prices for mould blown pieces ranged from £50-80 before bartering, and went up from there for larger pieces such as bowls with extravagantly attenuated lobes, the largest goblets and unusual forms like lamp bases and stylised birds. Not much cost less than £15. Even if I was ripped off, I didn’t care as it solved a mystery for me. And I hope you.
While my piece was being packed up, I took the liberty of spending some time photographing the rest of Aimon’s stock for future reference.