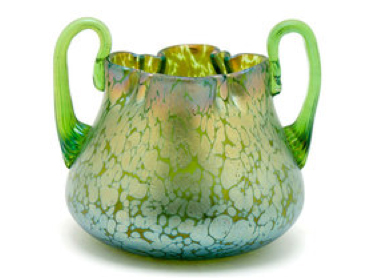 Most glass collectors will know the eye-catching iridescent glass in the Art Nouveau style (see left) typified by the production of the great glass companies Lötz (or Loetz) in Austria and Tiffany in the US from the 1890s into the early 20thC. The recent discovery of the Loetz pattern books in 1989 and work undertaken by collectors and researchers has shown us that much of the glass previously attributed to the company was in fact made by other companies such as Kralik, Pallme-König and Rindskopf. This makes sense as it’s business – if a product was successful commercially, other companies naturally would copy it or produce their own variations. Work is still being done and new discoveries are still being uncovered, and you can read all about these on the excellent websites loetz.com and kralik-glass.com.
As collectors, we often want to know ‘who was the first’, and the jury is still very much out on this one. Many have suggested that it was Louis Comfort Tiffany, who was inspired by ancient Roman glass that had been dug up after centuries in the ground. The minerals and salts in the soil had given the glass a varied iridescent effect which he admired and strived to replicate with his patented techniques for Favrile glass of 1894. Others say Loetz was the first, with production of iridescent glass beginning around the same time. Yet others say that, like so many design movements, it was almost ‘something in the air’ with each ‘forerunner’ coming to a similar conclusion at around the same time. 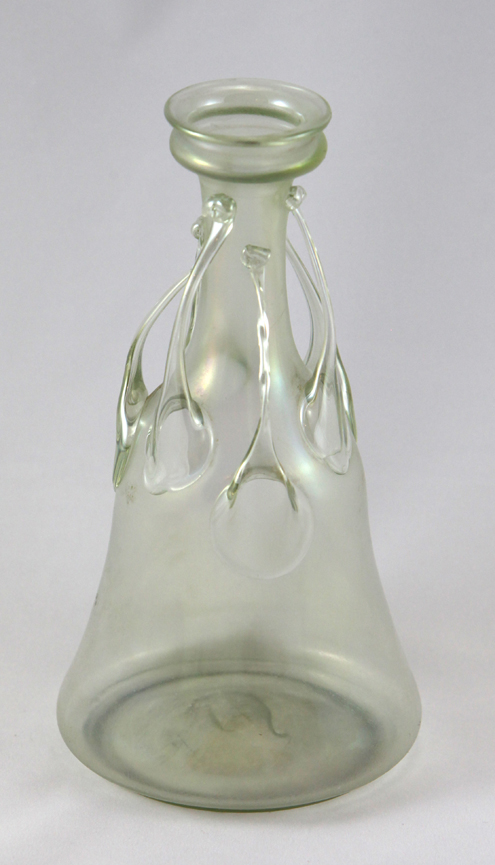 My good friend the Hungarian glass collector and professor Attila Sik has now added another name to the equation – Leo Valentin Pantocsek. A fellow Hungarian, Pantocsek (1812-93) was a medical doctor who received his degree in 1843. He became fascinated by the newly developed form of photography known as a daguerrotype and also ended up working in a glass factory owned by Stefan Kuchinka, in Utekac. There, in 1850, he developed the hyaloplastik (or hialoplastic) method, which he used for making glass coins that were embedded in glass chalices. Admired for their very fine level of detail and sharp pressed lines (right down to individual strands of hair of the person in profile), they won a gold medal at the Paris World Fair in 1855. Possibly made using some extension of the photographic daguerrotype process, Pantocsek took the secret of manufacture to his grave and surviving examples are not known.
In 1856, he extended his existing technique or developed a new one to iridise blown glass vessels when working as technician at a factory owned by János György Zahn in Zlatno (today in Slovakia). The result was a range shown and lauded at the (lesser known) 1862 World’s Fair in London. An example of one of his confirmed vase designs for Zahn is shown here (right). You can see other Pantocsek designs for Zahn in the collection of the Museum of Applied Art in Budapest by clicking here.
His native country did not hold his development in as high a regard, and it was largely ignored. Except by the Austrian Josef Lobmeyr and his brother who owned the esteemed glass company J&L Lobmeyr. They saw a future in the glass finish and ‘enticed’ one of Pantocsek’s glass-making colleagues away and thus learned how to make iridised glass. The Lobmeyr brothers passed this information (and probably the worker) on to their brother-in-law Wilhelm Kralik, who produced iridescent glass for Lobmeyr at one of his six Meyr’s Neffe factories – probably Adolfshutte. In 1873, Lobmeyr displayed a huge range of iridescent glass at the World’s Fair in Vienna where it received international attention and met with great success. The rest, as they say, is history, with many other makers and designers picking up on it and developing their own versions some twenty years later.
Zahn’s Hungarian factory didn’t stop producing iridescent glass, but his reach was not wide or powerful enough to make any impact. It was obviously quite different for the other companies that took it up in the late 19thC. As Pantocsek didn’t write his recipe down, the company ceased production after his death in 1893.
Further research can only be helpful and this entire issue is representative of one important point in the world of antiques and collecting – new knowledge can easily change ‘facts’ that were previously deemed set in stone. Very, very few things are static, and we’re always learning.

With thanks to Attila Sik, November 2013. Read a brief history of Hungarian glass written by Attila by clicking here, or join the Glass Association to read a more detailed account in their quarterly publication The Glass Cone.

One thought on “The origins of Art Nouveau iridescent glass?”