Even though Buenos Aires is well known for its amazing Art Deco antique shops, I was a little surprised to stumble across this teapot nestled amongst ceramics and glass on one stand. French Art Deco is plentiful, but British Art Deco is slightly harder to find there. At first glance, it looked like an Susie Cooper ‘Kestrel’ shape teapot, from the 1930s-60s, decorated with the early 1930s ‘Wedding Ring’ pattern. The knop on the lid and the lip of the spout seemed right. But, hang on a minute, the colours look wrong, and it just doesn’t seem ‘right’. Picking it up confirmed my suspicions – it was also much lighter in weight than I’d have expected. Turning it over revealed why – it wasn’t a piece of Susie Cooper at all.
Rather than the usual printed mark, there was a small red printed circular mark reading ‘FABRICADO A MANO JAPON’. Most ceramics made in Japan for export from the 1930s-60s are made from a lightweight, delicate bisque, so that accounted for the weight. Japanese makers also pillaged British and European designs for ‘inspiration’, producing inexpensive mass-market copies for decades. As Buenos Aires became rich with its exports and meat during the 1920s & 30s, they acquired the best of the fashionable Art Deco style. Clearly, not everyone could afford this, so resorted to ‘lookey likeys’ from elsewhere.
I though about adding it to my collection as a lecture prop, but the bisque is fragile, as I say. Not only that, but the dealer wouldn’t budge from her 200 pesos price tag – at around £30, it was a bit expensive for what it was. Still, an interesting thing as it’s a British design copied in Japan and made for the South American market — truly pan-continental!
So what did I buy? As I said in a previous blog entry, there was much more mid-century modern design around, so I was determined to pick up a piece of that as a souvenir. By 6pm, I was giving up hope until I spotted the small 5.5 inch high vase below hiding on a stand. I recognised it immediately as Moser, from the colour and the style. It’s a factory I don’t know too much about, so it represented a good opportunity to learn too. Picking it up revealed it was both hand formed and cut, as the bulbous body and sharp asymmetric rim showed. Rather good, I think. The designers Frantisek Zemek or Vera Liskova sprang to mind as it’s just their sort of thing – and the acid-etched ‘Moser Karlovy Vary’ mark on the base confirmed it was postwar. I was hooked and the bartering began. 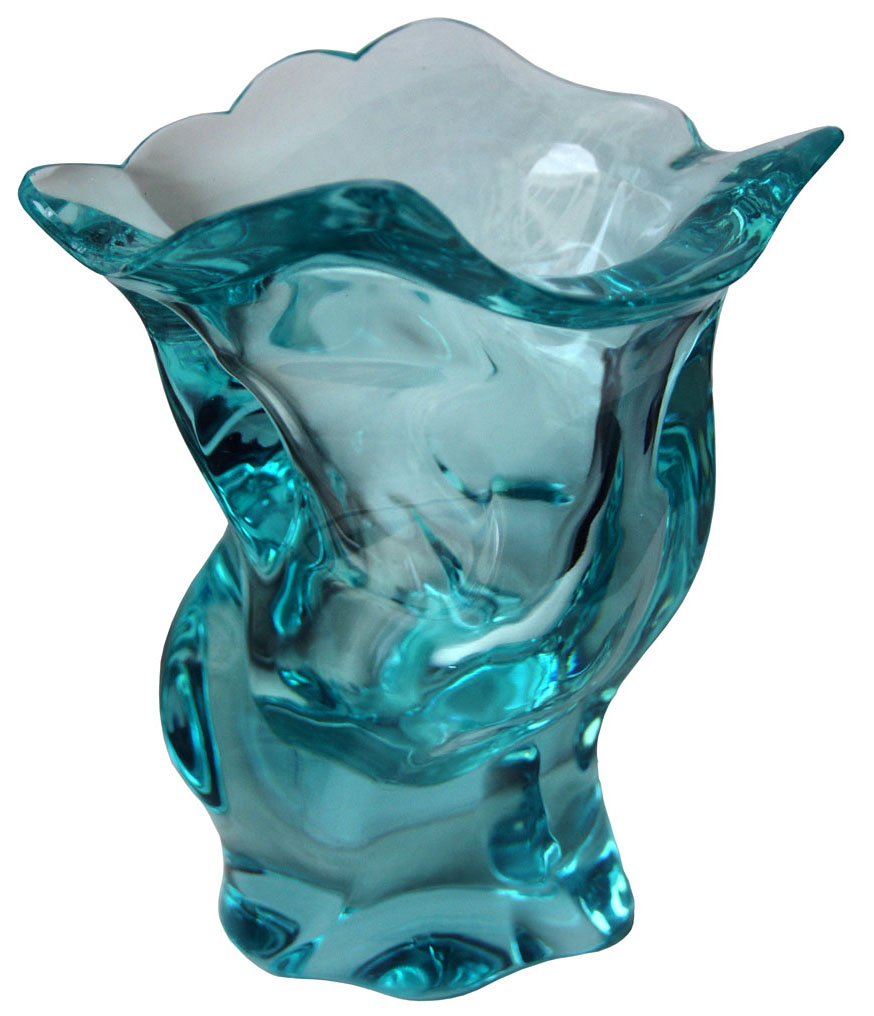 The seller started at 300 pesos (£45) and I cheekily offered 200 pesos (£30). We swapped ‘sob stories’ (with smiles) for the next few minutes before shaking hands on 225 pesos (£34) if I paid cash. Deal!
Immediately upon returning home, I set about researching it. A few enjoyable hours of leafing through books later, and I was none the wiser. A quick email to the lovely people at Moser led to a rather unexpected response. After confirming it was a Moser piece, they told me that it was produced in the ‘Beryl’ colour, and dated from around 1946 – and they sadly didn’t know the designer. I’m certainly not saying the esteemed Moser company don’t know their own designs, but that date does seem rather early, especially for a design like that. I’d have put it at anything from 5-10 years later…but what do I know? So there’s the mystery – who produced this rather lovely design, and when? If you know, please be kind and share!

Update! I now think this piece was designed by Heinrich Hussmann.