Last Friday Judith Miller and I were invited out to the heart of ‘Metroland’ to visit the charming town of Chorleywood. The owners of the independent Chorleywood Bookshop, Sheryl and Morag, asked us to speak at an evening event in the local hall, followed by a book-signing and an ‘Antiques Roadshow’ style valuation.
After perusing their marvellous bookshop on the smart parade over a cup of tea, we were ready. And we needed that cup of tea! When we pulled up outside the hall, well over 100 people had arrived and were patiently queuing, clutching bags full of treasures acquired or inherited, but most certainly cherished. 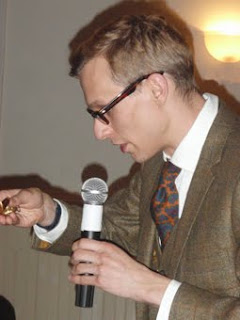 Judith kicked off the event with a talk that crossed Continents and history from 16thC Chinese porcelain to Lalique (and Lalique-alike) glass to treen snuffboxes. I then followed up with a talk that examined the effect of fashion on the market – both in terms of historic changes and changes today that affect desirability, and so values. Both of us brought pieces from our own collections with us, with me bringing some Fat Lava, transfer-printed blue & white ceramics, ‘Flow Blue’ ceramics, and postwar Czech pressed glass. I ended by introducing my new TV series, Cracking Antiques, and commenting on how the wheel is turning once again and traditional, ‘brown’ furniture is becoming sought after once again after a few decades in the doldrums.
Then it was into the audience to see what they had brought in – and they didn’t disappoint! A truly wonderful, varied selection awaited us from mid-19thC was dolls to Chinese ceramics, a pocket watch or two and a superb micromosaic of St Peters that had to be worth over £1,500-2,000! A marvellous evening was had by all, and Judith and I finally left at gone 10pm to wend our way back to London. Thank you, Sheryl and Morag!