Combined with my busy role at Miller’s, the build-up to Cracking Antiques has meant that there’s precious little time for a break right now. A short holiday was cancelled and replaced with a relaxing overnight break at the wonderful ‘Ashdown Park‘ country house hotel in Sussex this weekend. The drive there revealed Standen was nearby. For those of you who don’t know, Standen was the country house of the wealthy Beale family. Built in the early 1890s, it was designed by Philip Webb, a close friend of William Morris. As you’d expect, it’s an Arts & Crafts showcase, from the vases on the mantelpiece, to the mantelpiece itself, and the room that the mantelpiece is part of. Indicative of so many core themes of the Arts & Crafts movement, it’s exactly the sort of country house I’d love to live in. Set serenely in picturesque rolling hills which it doesn’t dominate, it’s quirky, comfortable and built on a human scale. A home rather than a house. 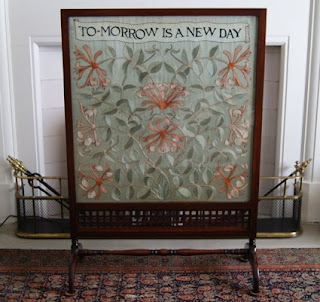 My love for this style movement was instantly rekindled as I wandered around rooms bedecked with original William Morris wallpaper, furnished with comfy-looking period furniture, and embellished with tapestries, embroideries, ceramics, and glass of the period. In 2008, a truly eye-wateringly beautiful bedspread was returned to the Beale’s bedroom. Said to have been embroidered by May, William Morris’ daughter, the superb condition and vibrant colours have remained as it spent most of the last century hidden and forgotten in a chest. So dazzling was it that I forgot to take a photograph, but I rather liked the cheery motto on this firescreen. 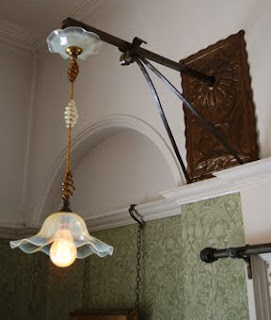 Downstairs, my eyes were instantly drawn to a very modern set of wall lights. The form and ‘straw-opal’ colour of the glass fittings instantly suggested Powell & Sons, but the overall design and embossed copper backs were more intriguing. It transpired that they were designed specifically for the house by Webb, and made by that modernising marvel in metalware of the period, W.A.S. Benson. The stylised flower on each panel was different, and I was told that the gentle, warming light they give is magical at night. A bright and breezy walk around the grounds in that type of clear, blue skied Spring day that England does so well finished off a perfect weekend and left me refreshed for the week ahead.