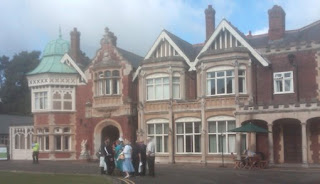 July has been a busy month for me. In addition to my usual jobs, this month I enjoyed three Antiques Roadshows in nearly as many weeks. I wrote about Melrose below, and that was followed up a few days later by an event at Bletchley Park, just outside Milton Keynes. If you think you recognise the name, you probably do. Bletchley was home to the talented team led by Alan Turing who broke the code used by Hitler’s ‘Enigma’ machines. Without this breakthrough, the course of World War II would have gone very differently, and our home computers may not be where they are today. 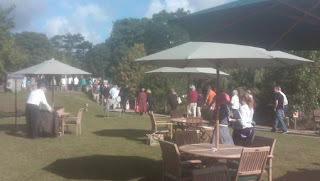 Over 3,500 people attended the event on a sunny Sunday – not quite a record, but up there with the busiest Roadshows, so I was told. The image above shows the house as all the specialists arrived at 8am, and the image here shows the queue as it began to build shortly afterwards. It stretched across the entire lawn, round the lake and into the distance for most of the day, but everyone saw a specialist.
Only a few days later, I was on a train bound for Llandeilo in South Wales for an event at the beautiful Aberglasney Gardens. 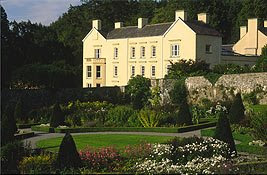 Originating in the late 15thC, and restored in the early 1990s, the house and gardens enjoy breath-taking views of the rolling Welsh hills. Arriving mid-afternoon gave me a few hours to explore the town, where I stumbled across The Works Antique Centre, near the railway station. If you’re passing through or holidaying nearby, I can certainly recommend a visit to this rabbit warren of rooms packed with things to see and buy at very reasonable prices. Amongst the things I bought were these two 1980s Rosenthal plates designed by Dorothy Hafner (below). Very postmodern in style, I think they were a good buy at £10. While you’re there, I can also recommend The Mount Antiques Centre in nearby Carmarthen, found again near the railway station. 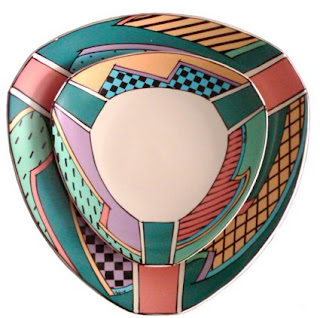 Many people associate Wales with rain, and while the day I arrived was hot and sunny, the day of the event was true to form, with the heavens opening for most of the day. I don’t mind getting a little bit wet, but this was something else. Anyhow, I had an umbrella to shelter under – it was those in the queue I felt sorry for. But camaraderie and cheer was strong, and we worked through the queue as fast and politely as possible, before we were all moved into the marquee to carry on. I filmed a spot, so keep your eyes peeled when the series airs to see what I found.
Although there are more to come, Aberglasney was the last Roadshow of this season that I’m scheduled to attend. I’ll miss all my colleagues greatly, and will look forward to seeing them again next season. In the meantime, I’m preparing for an exciting new project, more about which later…