Filmed during the first ever retrospective celebration of the life and works of Frank Thrower in Summer 2006, the documentary film of Frank’s life, “I’m Forever Blowing Bubbles”, will be shown on the the Sky 2 Arts channel on Sunday 9th August at 7pm.
This fascinating documentary was filmed and produced by Nigel Edwards of InHouse Productions, and was co-directed by Graham Cooley, the foremost collector of 20th century decorative arts in the UK. Graham also acts as the focal point during the film, which also includes interviews with members of Frank’s family, many of his colleagues at Dartington Glass, glass experts including Charles Hajdamach, and I. 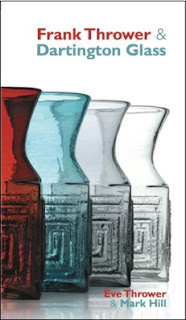 You can also see exclusive footage of the legendary FT15 ‘Ship’s Decanter’ being made, which are nothing less than spectacular. If you love glass and 20thC design, you’ll love this film, which draws to a truly tear-jerking end.
Tune in to see what I mean.
Copies of the film on DVD can be bought at £12 + P&P by emailing the Glass Association, who funded it, at crystal-edge@hotmail.co.uk. If you’re interested in reading about Frank and his globally successful designs, you can buy the book, written by his daughter Eve Thrower and I, for £12 + P&P by emailing evescanlon@hotmail.com. And don’t forget to make a note in your diary for 8th August at 7pm – I can guarantee you won’t be disappointed.

One thought on “Frank Thrower & Dartington Glass on Sky TV”