On my recent trip to Dublin to talk at the Irish Antiques Dealer’s annual fair, I picked up an interesting book on the €1 vintage book stand at the Dublin Flea Market. Called ‘Antique Dealer: An Autobiography‘ and written by R.P. Way, it was published by Michael Joseph in 1956. I thought anyone who was old and experienced enough to write an autobiography then must have begun dealing around a century ago. And sure enough, I was right. Reginald Way was the son of John Philip Way, a Bristol-based antiques dealer, and was born in 1893. He began working in his father’s business in 1910 and saw it change dramatically over the next four decades with the arrival of the motor car (and how that changed browsing and shopping habits), two world wars and economic depressions.
It’s a fascinating tale that’s written in a lively manner as if Mr Way was recounting it, pipe in hand, while sitting in a leather wing armchair in front of you. I can’t find out how long after 1956 he died, and the only negative thing I have to say about the book is that the end is rather sad as poor old Mr Way loses sight in both of his eyes and retires to a beautiful coastal spot that he can’t see. Needless to say, he also can’t see any of his beloved antiques built up over his fascinating life. So perhaps the picture in my mind’s eye of him recounting his life story ought to also include a typist!
You get a real flavour for the age-old camaraderie and characters of the antiques business, and many of the established names (Mallet, Christie’s etc) make an appearance. That’s not all that hasn’t changed in a century, as a number of passages clearly state. The book isn’t expensive to buy (try Abebooks) but for those of you who don’t want to buy it, or can’t, here are a few of those passages. Many could have been written today and we perhaps need reminding of others.

Written in the 1920s: “The reason for all this hurry and racing about is the terrific increase in the cost of living, higher income tax and rents, higher wages and overheads and, of course, the great scarcity of antiques and the rise in the price of them when they are found. Most important of all too is the fact that there are now nearly treble the number of antique dealers hunting for them.”

About a speech given by Frederick Lyne at a dinner which was the effectively the first ever meeting of the BADA, “It was quite simple, pointing out that dealers ought to, and could, get together in a more friendly spirit and cease to show the bitterness and harshness which had lately crept into our dealings at auction sales…If we realised this, each dealer could look upon his fellow dealer as a good neighbour and not as an enemy.”

“..the antiques trade is unique amongst trades because we had to search individually for all the things we bought. Nothing could be ordered from a wholesaler, no objects we sold were identical; dealers might have similar goods, but of different values, therefore there could be no such thing as price-cutting because each thing we sold stood on its own value.”

About an American businessman visiting his shop in 1921: “He was astonished to learn how old the business was and that I still only had this one small provincial shop. He asked why I stayed in such an unremunerative business and finished up by remarking, ‘Say, son, you’d make more money selling peanuts in the States!’.”

Proving that randomly bad years have happened for ages, “As the year of 1920 drew to an end, all we antique dealers agreed that it had been the worst year in the trade since the war years of 1914-15.”

“I know that people often wonder how dealers can bear to part with some of the beautiful things they acquire, but I think that in every true antique dealer’s blood is the thrill of the chase; he must sell what he buys to obtain money to satisfy this ceaseless urge to hunt for more and more interesting pieces and to be able to pay for them when they are found. To balance this, I should think that an antiques dealer gets more disappointments than anyone else in the world. The hundreds of sales I’ve been to and the hundreds of houses I’ve called at that have been a sheer waste of time proves this.”

“In England, a man or woman goes into the antique trade because they have a great love or flair for antiques. The excitement of discovery is is as alive in them as it is in an explorer who sets out on his travels – not for the journey, but for the unknown land he hopes to find. To the English, dealing in antiques is something far more than a stepping stone.”

The image below of a provincial saleroom during the 1950s is taken from the inside covers of the front and back, sadly stained by the glue used for the hardcovers. 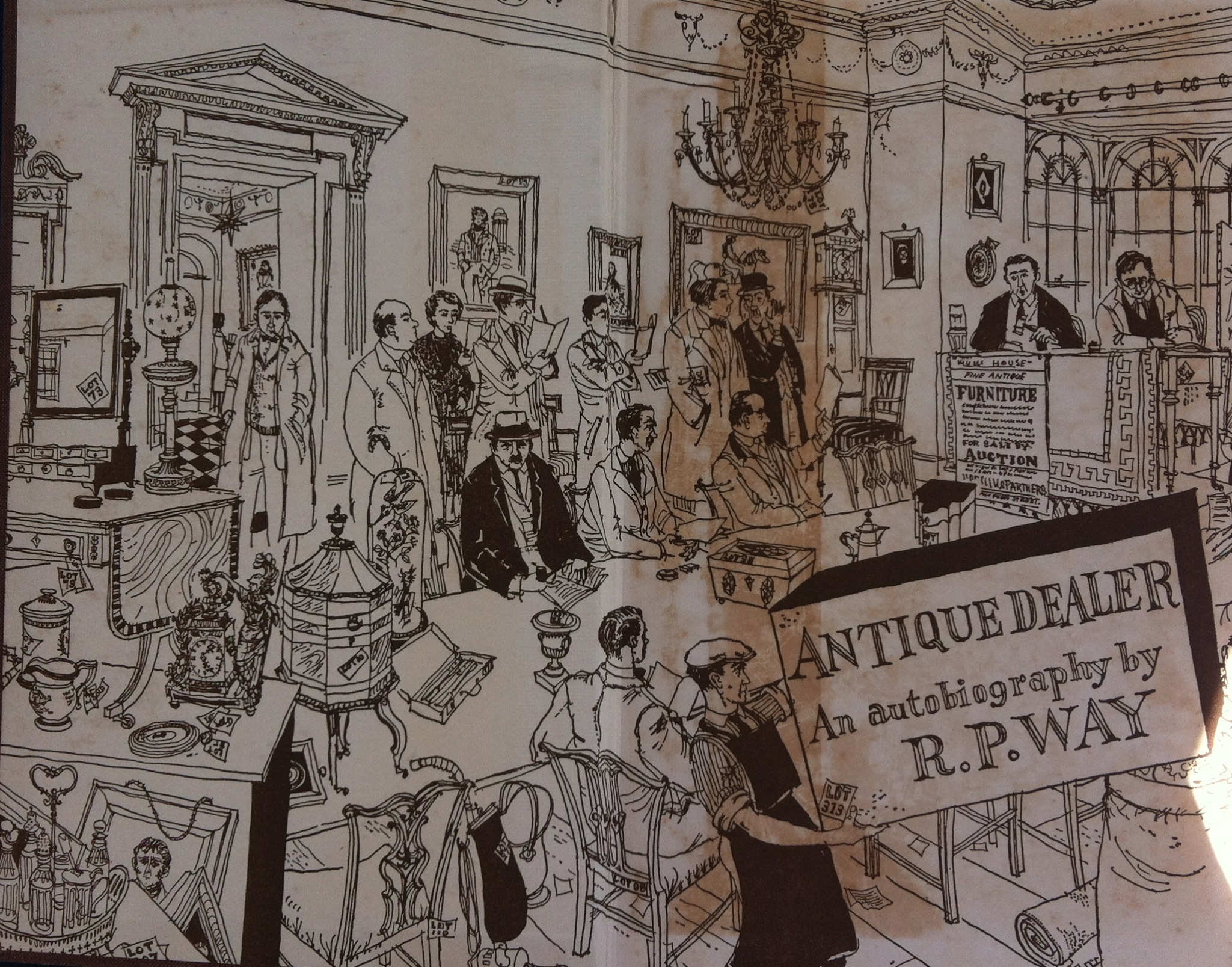