On my way back to the ‘Big Smoke’ from filming at the West Sussex Roadshow a few weeks ago, I stopped off in Dorking, Surrey. Nestled beneath the South Downs, the town has always been known for its antiques centres and shops clustered along West Street. As I grew up nearby, it’s long been one of my favourite hunting grounds. And I’m in good company, as Margot Leadbetter, Penelope Keith’s character from BBC’s ‘The Good Life‘, also shopped there – most memorably for a spinning wheel…
Like so many antiques shopping venues, it’s changed dramatically over the past few years. But it’s still excellent, with plenty to choose from, whatever you’re looking for. You can browse a full list of the many shops by clicking here, but most of the action for my visits is focused on a couple of great antiques centres. These include Christique, Talbot House, The Pilgrim, and Dorking House. The Pilgrim is always rammed with a huge variety of objects, and stock is refreshed regularly. Don’t forget to check out the corridor on the left as you go in, as it’s their version of a ‘bargain basement’! Dorking House is a little higher end, and also has a great selection of furniture. I bought a lovely early 19thC decanter for a wedding gift there last time. 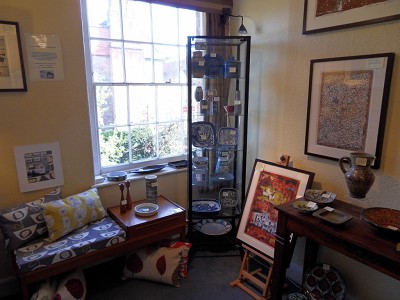 But my wallet always rattles in my pocket when I go into Christique and Talbot House. One room I always head for in the latter is ‘Studio Art‘ run by Jude Hill (shown left). She stocks a fantastic range of mid-century modern ceramics, glass, paintings and prints from Scandinavia, France, Italy, Germany, and the UK. Prices are keen, and I really love her ‘look’. I also picked up a flyer for a new, larger venture she’s just begun – The Bournside Gallery in nearby Gomshall, so I’ll look forward to visiting that next time I’m in Surrey.
Christique is very much the newcomer, having only opened in the past year or so. It’s smart, clean, very welcoming, and absolutely VAST! The centre expanded into adjoining barns shortly after it opened, and there’s much to tempt in the many cabinets and warren of rooms inside. And there’s a super coffee room and garden to recover over a cuppa in afterwards! It was here that i found my purchase for the day – a rather intriguing print by Pieter van der Aa (top).

What attracted me was the large size (it’s 14in (35cm wide), the exotic and unusual subject of Dutch merchants arriving at the ancient Indian city of Visapour, and the wealth of detail which includes sleeping camels, and crocodiles in the moat! Van der Aa (1659-1733) was a Dutch publisher of maps and atlases and, as he was very successful and prolific, his work is widely admired and collected today. Dating from 1719 (or 1727, according to some records), it’s a copper plate etching. Hidden away in a corner with some other less exciting prints, it was mounted but not framed and glazed. It has the folds it was issued with, but is a little grubby and slightly yellowed – but for a very interesting and detailed early 18thC print, I didn’t think £7.50 was bad!