Over the past six years, the King’s Lynn Arts Centre has been integral to creation of a number of new international markets in 20thC design. Liz, Nick, Amanda and team there (seen above) have put their full support behind a number of major exhibitions that have launched new areas across the world, including the work of local international glass designer Ronald Stennett-Willson, ‘Fat Lava’ West German ceramics, postwar Czech glass, and much more. Without their hard work and generosity in supplying and staffing the space, and promoting the exhibitions, these innovations could not have taken place. And I know the owner of the collections put on show, Dr Graham Cooley, feels exactly the same.
So we were naturally shocked to hear that the centre was marked for closure last year, due to local government cuts. But the team are made of stronger stuff, and have now regrouped and relaunched themselves as an independent charity – to enormous local and nationwide acclaim. Even though this exactly the sort of thing that David Cameron is urging us all to do, it’s not an easy task at all, and they should be applauded for their undoubted success. Last weekend, the official relaunch of the centre saw a whole host of varied events from performances to exhibitions to valuations.
I was delighted and honoured to be invited to be their Patron of Applied Arts earlier in the year, joining Brendan Coyle (from Downton Abbey) as their Patron of Performing Arts. I took part in the launch last Saturday with an afternoon of valuing antiques and collectables brought in by local supporters. I was very grateful to be joined by my BBC Antiques Roadshow colleague John Foster, and we saw some truly lovely things as the afternoon progressed. These included a number of maps in wonderful condition worth around £100 each, a stunning mid-1930s Clarice Cliff vase worth around £300-400, and plenty of silver and Victorian ceramics. All good fun, and plenty of smiles all-round. 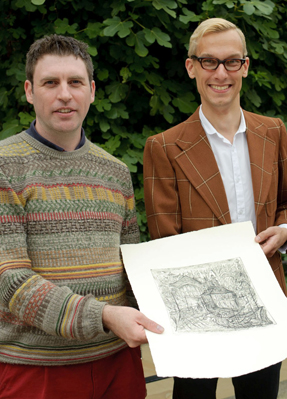 At the end of the day, I was stunned to be given a marvellous gift – a commemorative limited edition print featuring the Arts Centre and other historic King’s Lynn landmarks, such as the Custom House (see below).  I was also lucky enough to meet the artist, Neil Pittaway, and talk with him about his work (left). Deeply, deeply impressive is all I can say – both the work and the artist. The youngest member of the Royal Watercolour Society, he works across many media from copper plate engraving to watercolour and pencil. Much is done ‘en plein air’, ie; from life in front of the buildings or scene. He then later builds up the image to incredible levels of complexity by adding memories and personal thoughts. They really are quite unique, and quite incredible, and it’s not surprising to learn that his work is in many public and private collections, including the Victoria & Albert Museum.
As you may have guessed if you read my blog, I’m a bit of a print fan, and this will take pride of place in my collection. To see more of Neil’s work, click here to visit his site. His work is popular already, but I can see his star rising much further. If you want to buy one of his commemorative prints for yourself, which I really do recommend, they cost what i think is a very reasonable £95 each. Please contact the King’s Lynn Arts Centre direct for more information. All funds go to support the centre, making it an even better buy. While you’re at it, check out their schedule of events, as I know you won’t regret a visit.