I spent my Summer holiday this year on a very American type of vacation – a road trip. Starting and finishing in Los Angeles, we took in San Francisco, the Napa Valley, Yosemite, Death Valley, Palm Springs, and much, much more. Although it was strictly a holiday, how could a diehard collector like me miss the chance to do just a little ‘tiquin’ en route…

After a night at the hilarious yet heart-warming Madonna Inn in San Luis Obispo, the banker and I spent the day at Hearst Castle, built at San Simeon by media magnate William Randolph Hearst. The inspiration behind Citizen Kane’s scarily sprawling ‘Xanadu’ mansion, George Bernard Shaw famously said that ‘San Simeon was the place God would have built – if he had the money’. Words can’t describe how lavish and wonderfully bizarre this place is. Every vista and glimpse offers something for the eye to feast on. And it’s an intensely personal view too – Hearst was fearless (and rich!) enough to mix styles, periods and even countries of origin. Don’t be surprised if you see ancient Egyptian statuary on Antique Roman columns, all contained in a 1920s fountain. He was certainly creative!
After a night in the tranquil and upper class Carmel (but what’s with the utter rubbish in the so-called ‘art’ shops there?), I persuaded the banker to let me stop off in Monterey. After watching seals sunbathing on rocks, I ventured into the enormous Cannery Row Antique Mall (above), which claims to be ‘the largest antiques and collectibles on the central coast‘. And that’s almost certainly justified – the ground floor (above) is huge, and that’s before you find the staircase and realise that there’s another whole floor more! 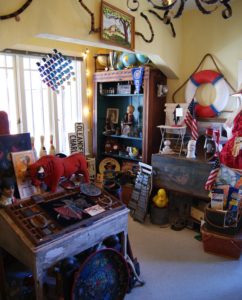 If anything, kitchenware and tableware dominate the selection of tens of thousands of antiques, retro pieces, and collectables for sale. 1950s-70s Pyrex featured large – all colourfully printed and at affordable prices too. My friend Katherine Higgins would have been in heaven! Amongst it all you’ll find plenty of pressed Depression glass, and a couple of stands selling paper ephemera such as trade cards, postcards, photographs and more dating from the late 19thC-early 20thC. The best selection can be found in the store at the back of the first floor – I even found an original tourist snap taken during the 1920s with the Pyramids and the Sphinx in the background. As I had posted a much earlier image on my blog when I left for my holiday, I had to have it – especially as it was priced at $10! 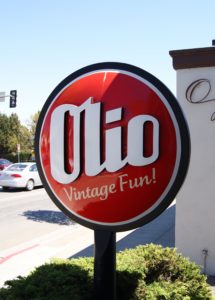 There are a few worthwhile antiques and collectables shops in Monterey, meaning you could easily spend the afternoon leisurely wandering around. Apart from Cannery Row, my favourite had to be the charmingly small Olio (below) on Lighthouse Avenue. Operating out of the front rooms of a private house, everything here dates from the 1950s-70s, is rather good fun, and makes you smile. And that includes the prices – you’d struggle to find here costing anything over a couple of hundred dollars. In fact, many things that I had seen priced highly in the UK were so cheap here that I wished I had hired a U-Haul. Much as I wanted the large bright orange bull in the photo below ($50), my luggage didn’t and, with so much of the trip to come, I couldn’t fill up the precious little space I had quite yet. So away I went having spent $6 on a rather amusing 1950s wood and metal block print showing a penniless businessman pulling the pocket linings of his smart suit out in despair. Somehow it seemed to reflect so much of our current economic situation right now.
When we got back to our car we found we had gained an additional decorative item in the form of a parking ticket – still, that was much better than being pulled over for speeding as I was last time I left Monterey!