I spent my Summer holiday this year on a very American type of vacation – a road trip. Starting and finishing in Los Angeles, we took in San Francisco, the Napa Valley, Yosemite, Death Valley, Palm Springs, and much, much more. Although it was strictly a holiday, how could a diehard collector like me miss the chance to do just a little ‘tiquin’ en route…

Next up on our road trip was Napa, finally reached after some pretty hair-raising freeway driving around Berkeley during rush hour. I didn’t find many antique or collectables shops in the town, but the two that were there had a fairly good selection of corkscrews and wine drinking accessories, as one may expect. For me, the best was ‘Antiques on Second’, which had a great selection of ceramics, glass, metalware, and 1950s-70s fashion. Out of all the shops I went to on our trip, I could have spent a fair bit of time and money here. Almost as much as I could have at Santa Barbara’s excellent ‘Antique Alley’ on State Street, which I had visited a few days before.
Despite being tempted by some Roseville pottery, I ended up opting for a black 1940s Parker 51 Vacumatic Classic fountain pen, with a Blue Diamond clip and a Lustraloy cap – a bargain at $32! As it had taken us most of the day to drive there, the sun was already setting, so we called it a day and enjoyed a delicious dinner accompanied by a bottle of local wine at the nearby Grace’s Table.
The next day in Napa Valley was spent in a bit of a haze, courtesy of experiencing almost too many delicious red and white wines. I think I might have even managed to become sozzled before the sun passed the yard arm – hic! Two particular highpoints were the James Bond-like cave setting of the Jarvis Winery, and champagne tasting at Mumm Napa. I’ve always turned away most Californian wines (particularly those on airplanes) as they tend to be too oaky and leave me with a dreadful headache. How wrong I have been – I just need to be more selective rather than ignoring them all. 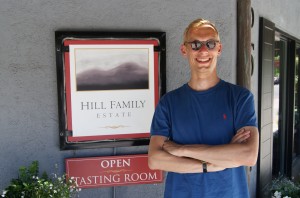 From Napa to Sonoma, sun-soaked vineyards stretched as far as the eye could see. You could spend a month here and not visit even half of the wineries offering tastings. I even found a winery called the Hill Family Estate (below). They’re no relation, alas, but they made fabulous wine as you’d expect! Yountville offered lunch and (for me) the perfect combination of antiques, art and wine at Ma(i)sonry, just north of the town centre. There you’ll see an eclectic and eccentric array of objets beautifully displayed in a modern and minimal stone building that recalls those found in Southern France or Italy.
Antiques were off the agenda for our next stop – the spa town of Calistoga. Although I found two ‘consignment’ shops in town, they didn’t hold anything exciting for me. Instead, we plunged into thick, smelly and peaty mud baths at the famous and fabulously mid-century modern Dr Wilkinson’s Hot Springs Resort (above). From mud bath to hot bath, we were then wrapped up in blankets like mummies for a ‘resting period’ before being given a vigourous massage to end it all. Although I found the whole thing rather exhausting for some reason, I left honestly feeling like a new man. And a very lucky one at that. Just the thing we needed after a long and busy year – and perfect preparation for the next leg of our journey.