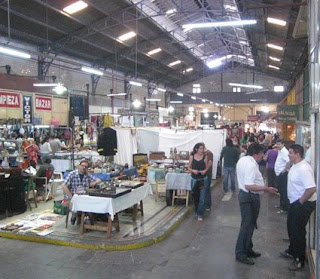 The undoubted heart of BA’s antiques scene is the historic San Telmo district, the first district of this mega-city to be settled and built. Divided into a grid, head towards Defensa, starting at the crossing with Av. Belgrano, only minutes walk from the famous Plaza de Mayo.
You’ll soon be confronted with an unparalleled array of stores offering what must be the best selection of antiques in the Americas. The city’s immense wealth in the early 20thC meant that, armed with impeccable taste and bulging wallets, its residents could afford to import the very best of Art Deco furniture, ceramics and glass. It’s these that the hundreds of dealers found here specialise in – I promise that your jaw will barely leave the floor! 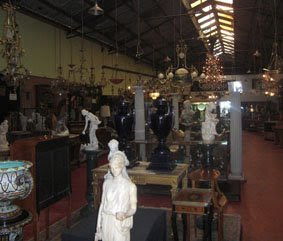 Check out Gallery 800, on the right as you head down towards Plaza Dorrego. Despite its name, its 10 or so dealers don’t specialise silver, but instead devote themselves to glass. The central and back stands are particularly interesting. I was tempted by some reasonably priced Charlotte Rhead chargers, but decided to save my money for something more unusual, or Argentinian. On that note, pack the credit card and don’t expect to find bargains. The quality is very high, but so are the price tags. As I keep saying, dealers aren’t stupid and these professional dealers know what their stock is worth. 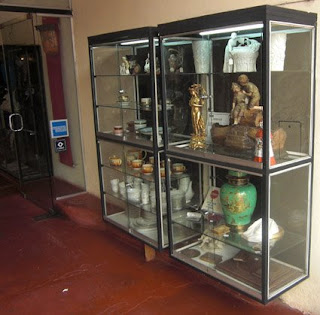 Continue down the street to see more of the best of designs by Daum, Gallé, Lalique and others. Leave plenty of time, as there are also plenty of side streets, most of which are lined with more stores or arcades of stores. Galeria de la Immaculada Concepción on Defensa 845 is one, with its ‘cages’ full of treasures from the high end Deco dealers to lower end part-timers (my favourite!).
In the cavernous Remate San Telmo, at Defensa 819, I managed to find my first treasure. Sitting innocently in this street-side cabinet (above) was a Namiki maki-e lacquer cigarette case. 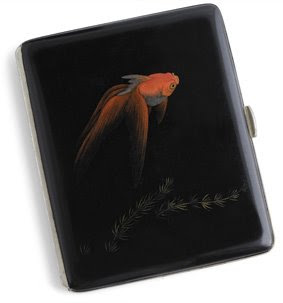 Maki-e lacquer has been produced for centuries in Japan, and designs can take many weeks to execute. During the 1930s, the Namiki Manufacturing Company revived the technique, applying it to pens, cigarette boxes and lighters, many of which were sold as luxury products through a partnership with Britain’s Alfred Dunhill. This was decorated with an goldfish, the most common pattern.
The all-important mark on the back (left) showed it was by Makizawa Shobi, who was born in 1880. He became a pupil of Shosai Shiroyama in 1899, joined the staff of the Iwate Prefectural Technical High School in 1905, became an independent lacquer artist in 1907. He was also one of the six committee members at the time the ‘Kokkokai’ group of maki-e lacquer artists was founded. An important guy indeed!

The gold washed interior was inscribed with the owner’s name (Jose Pablo Costa) and dated 8-12-1941 – an interesting year given that Pearl Harbour occurred in December.
The lacquer was also a little worn, so this was obviously a much-loved piece, which perhaps explained its 500 peso price tag. Some serious negotiating and the use of a magnifier later, and it was mine — for 250 pesos, which is around £50! Maybe there are bargains here after all, as I think it has to be worth around double that, at least.

Matt Cuthill from New Zealand kindly drew my attention to the cigarette box shown here, which is nearly identical to my bargain from Buenos Aires, but in much better condition. Signed by Murata Senzan and also complete with its eye-wateringly rare Dunhill card box, it was sold by Webb’s auction house recently for NZD 1,700, which roughly equates to £870 or US$1,360. So I think the £100-150 I mentioned for my worn one seems about right then!