Our flight back from Cusco to Lima has been ‘delayed’. Apparently, the airline sent a smaller plane than was expected, so it was either a seat on the wing or a later flight. I opted for the latter! This means I am writing this entry sitting on a balcony in a fabulous eaterie in Cusco that happens to have a wireless connection. I’ve just scoffed the most delicious breakfast omelette known to man. Of course, after four days of trekking along the Inca Trail, any breakfast omelette would be welcome, but this was truly exceptional with its mix of free range eggs, chunks of chorizo, onions, chilli peppers and more.
My stomach was complaining after a lengthy but utterly fascinating walk around the Convento de Santo Domingo, and its odd mix of almost unearthly Inca buildings within a traditional Western-style Christian convent. There, we stumbled across a selling exhibition of traditional Peruvian hand-carved gourds. The carving of gourds with complex scenes of people, jungles, wildlife or devotional motifs dates back over 4,000 years in the Peruvian Andes, and entire families and even towns are dedicated to producing this sought-after souvenir today. 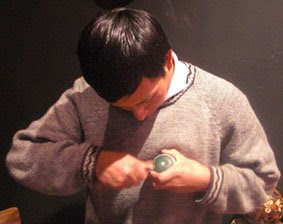 This exhibition featured the work of master carver Angel Alfaro Nunez, who is part of the renowned Nunez family of artist carvers, and was being looked after by his brother Charles Alfaro Nunez. Charles explained the process with the help of magnifying glass and, captivated by this intricate work, the banker and I left with two small examples as souvenirs. The image of mine, carved by Charles and shown here, really doesn’t do the detailed design on this diminutive artwork justice. Seeing really is believing – particularly as regards the perspective and level of detail. I was delighted when Charles offered to sign and date my new acquisition, making it just that little bit more special. You can find out more about the Alfaro family, and buy their gorgeous gourds at http://www.art-gourd.com.