I hadn’t really relished the thought of spending a few days in Cusco. After the chaotic – but honest – hustle and bustle of the developing city of Lima, I wasn’t particularly looking forward to a city described in all the guides as ‘touristy’. How wrong they were, as it proved to be one of the many highlights of the trip. After getting used to the altitude, I decided to get used to Pisco Sour, a cocktail made using egg whites and Pisco. Yummy! Next up was buying a suitable hat for the trek in the market, which was found for the princely sum of £2.54. Tours around the incredible cathedrals that line the main square nourished the brain and gave my culture-hungry eyes plenty to soak up. Religious paintings that at first glance appeared like those in thousands of Christian churches across the world, but at second glance included intriguing uniquely Peruvian details, proved particularly fascinating. A narrow second to these were the two museums behind the Cathedral, with their superb collections of pre-Columbian pottery and metalwares. The display of Inca mummies is also somewhat unforgettable!
I was inspired. I just had to find a small Peruvian souvenir to take back home. Cue spending the rest of the late afternoon scouring the city centre for antique or junk shops! I only found a couple, grouped together on and around the steep Cuesta de San Blas, behind the main Cathedral. All offered South American ‘tribal’ or domestic items, including ceramics and devotional or religious works, with a fair smattering of old cameras, partly rusted tinplate toys and other vintage imported oddments from around the world thrown in for good measure. 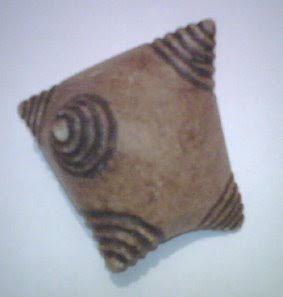 After browsing through a selection of charming naively painted Andean domestic pottery in the shop shown above, I settled on the small carved stone object shown here. As to its meaning (and indeed age, if it has any, which I doubt), I am sad to admit I have no idea – yet. My skills in Spanish are somewhat basic, meaning I couldn’t understand the shop owner’s detailed explanation. Still, the transaction was conducted with smiles and gratitude from both sides. I do know that the stepped protrusions have something to do with Inca mythology, but that is about all – so now I have some research to do!