On Thursday I attended what must have been one of the busiest Antiques Roadshows I’ve experienced since Hopetoun House. Our location was the beautiful country house Hartland Abbey (above), near Bideford in North Devon. The abbey was built in 1157, and was the last monastery to be dissolved by Henry VIII, in 1539. Its royal connections have continued, not only through the family of its current owner Sir Hugh Stucley, but also as it played host to Prince William’s stag night before his wedding to Kate Middleton earlier this year!
Few held hopes for a busy day as the weather looked to be grim, with heavy rain and winds predicted. It turned out to be quite the reverse, with blazing sun and blue skies throughout the day. As a result, the crowds descended from across Devon, and a steady stream of cars came into the valley along the driveway for most of the day. The team arrived at 8.30 in the morning (to find the above scene), and didn’t leave until nearly twelve hours later, with barely a break in between. Phew! From the thousands of people who patiently queued, many a treasure was uncovered, and many went away smiling broadly. They weren’t the only ones smiling, as I managed to film a couple of items which really fired my passions.  As ever, I can’t tell you what they were, so you’ll just have to wait until the show is broadcast to find out what they were. 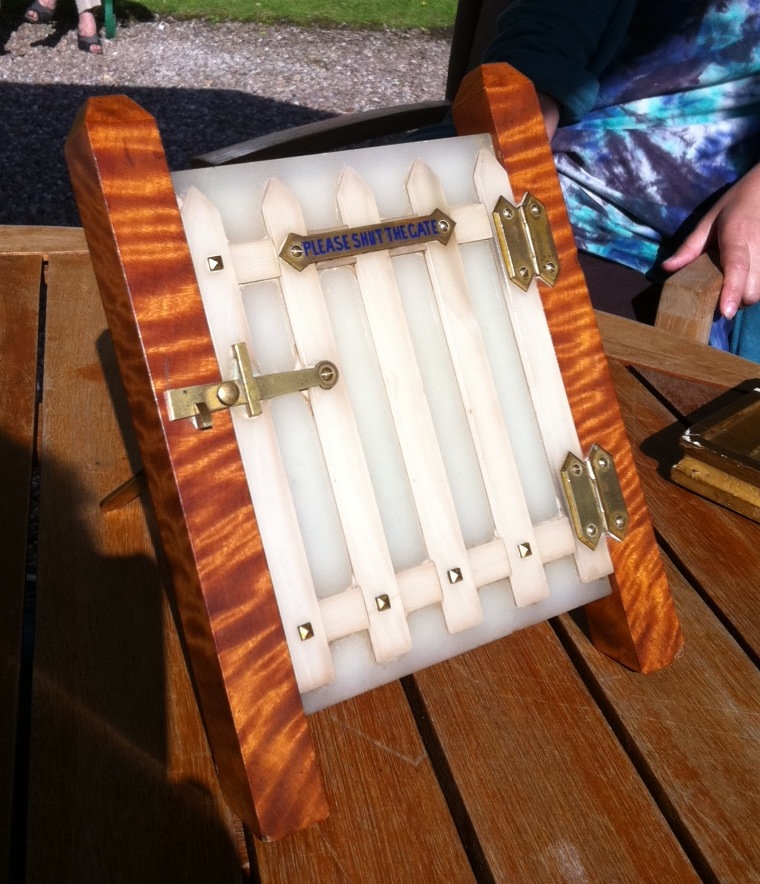 One item I can tell you about, that did catch my eye, is the piece above. It was one of the very last items that I saw, so was too late to be suggested for possible filming. Made from maple veneer, enamelled brass, and an agate-like creamy hardstone, opening the gate revealed an oval photograph frame. The materials and construction showed it to be of very high quality, and were quite unexpected at first glance. I think it dates from the late Victorian period (something the apparently original photograph inside backed up), and could easily see it fetching around £300 as a superb quality novelty piece. The owners were absolutely delighted, especially as they had no idea how their family had come to own it!