I’ve been a Freeman of the Guild of Arts Scholars, Dealers & Collectors for a couple of years now. A charitable organisation formed as part of the City of London’s ancient network of professional guilds and livery companies, its aim is to promote the study, curation, collection and trade in antiques, antiquities, decorative arts and applied art. It also helps and represents the people involved in these areas, and promotes honourable practice within the trade and profession. It does all of this by raising and distributing charitable funds to support historical projects, museums, research, and other similar causes. In this way, it helps to preserve our heritage for future generations. 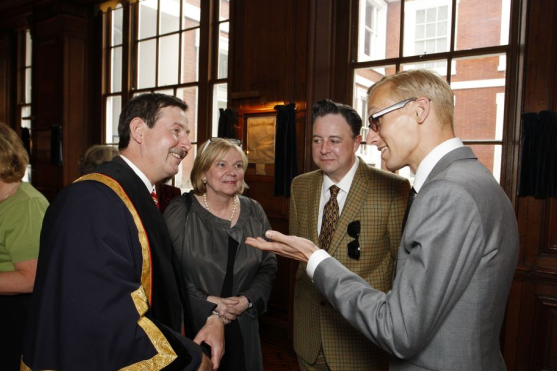 Founded by the late pottery dealer Jonathan Horne and Lord Brooke of Sutton Mandeville in 2005, it became recognised by the Company of Aldermen as a ‘Company without Livery’ in 2010. Within time, and once certain charitable financial targets are met, it will become a full Livery Company. Members are drawn from across the entire profession, and include dealers, auctioneers, collectors, historians, researchers, and authors.
Membership is limited, and I’m honoured to be a part of it. In May, I was invited to see my friend and Antiques Roadshow colleague Steven Moore become a Freeman, as I had proposed him. Judith Miller came along too, and the three of us enjoyed a wonderful and sociable dinner in the grand hall of the Worshipful Company of Tallow Chandlers in the heart of the City of London. The evening was important as it also marked the occasion of the installation of a new Master and Court, with Philippa Glanville taking over as Master from Mark Bridge of the Antiques Trade Gazette (above, left).

P.S.; Steven Moore now has a blog! As one would expect, it’s much more than just a little bit marvellous – check it out here www.stevenmoore.tv

Photographs are with thanks to and courtesy of John Deehan Photography