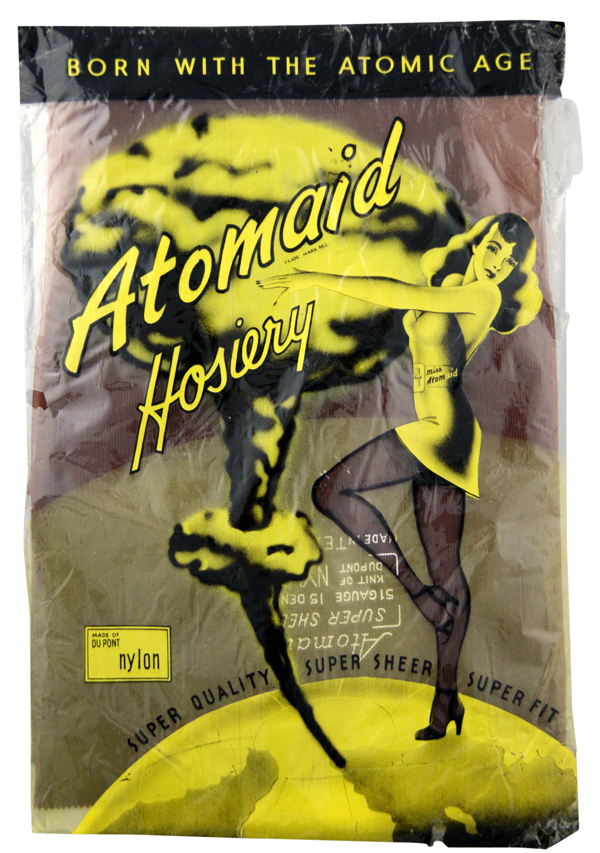 It’s not the sort of thing that I’d buy usually, but it was the artwork on this packet of 1940s Atomaid Hosiery nylon stockings that caught my eye. At first I almost thought it was a modern ‘vintage’ joke, but looking closer, it was clear from the material of, and wear on, the packaging that this was a period piece. For £3, I couldn’t say no!
So what’s the story here? Before the 1940s, a lady couldn’t step outside her home without wearing stockings. It was considered inappropriate for a woman to be bare-legged in public, unless sunbathing at the beach.
Coloured darker than skin, silk was the most common material used until the proliferation of Nylon, developed by Wallace Carothers at DuPont in 1935, and Rayon which was developed decades earlier. Nylon snagged less, so held up and lasted longer than silk, even if it was less shiny. They were also a good fit, as the packet shouts, ‘SUPER QUALITY – SUPER SHEER – SUPER FIT’.

During World War II, such materials were needed to make parachutes, tents etc, and many women selflessly gave their stockings to the war effort. As supplies of stockings dwindled dramatically against a constant need due to wear and tear (literally!), prices rose dramatically. All of this soon led to stockings only being worn on special occasions, such as going to church on Sunday. Many women resorted to ‘painting’ stockings onto their legs using darkening makeup, or even gravy browning, cocoa or coffee if budgets were tight! Some also drew on the characteristic seam line on the back of their legs with an eyeliner pencil.
After the war, stockings were reintroduced by DuPont, but production and distribution problems against a mad dash to buy them again in the first years caused periodic shortages. In some places these even led to ‘nylon riots’! 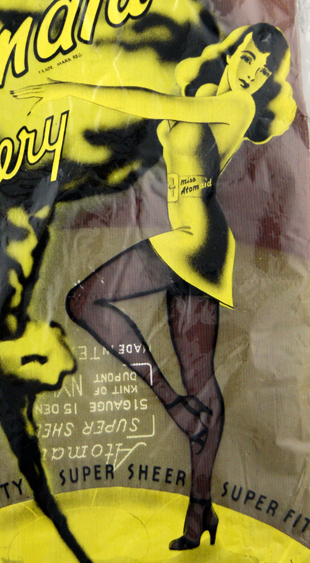 The fact that this pair has survived unopened and intact is incredible. I can only imagine that they were hoarded by a gorgeous and glamourous gal, but somehow lost within her wardobe of polka dots, pastels, and New Look dresses. Googling the brand brought up period newspaper advertisements in the Arkansas Hope Star and the Corpus Christi Caller dated 1947 and 1948. The Corpus Christi link is interesting as the stockings are printed ‘MADE IN TEXAS’.
But just look at the artwork! And there’s my imagined glamourpuss, ‘Miss Atomaid’ herself, elegantly posed embracing a nuclear mushroom cloud. Yes, that’s right – a nuclear mushroom cloud. In the late 1940s, the Cold War had only just begun, and the ‘Sword of Damocles’ threat of nuclear war between East and West was largely unknown. The discovery of atomic power was still touted as a positive and powerful part of the future and the devastating use of atomic bombs on Hiroshima and Nagasaki a few years earlier by the Americans had helped win and end the war.

What’s more is that our American beauty and her friend the nuclear cloud are standing on top of the world, foretelling the dominant role America would take in the world over the coming decades. Strangely, the artist chose to include China, miss out the Soviet Union, and place the source of the cloud on what looks to be Alaska…
All these images scream the period and are highly resonant today when placed together – particularly with the bold title ‘BORN WITH THE ATOMIC AGE’.
I wonder what a period fashionista would have thought upon seeing this packet in a shop. Would she have perhaps smiled (maybe wryly) at the incongruous combination or thought that, by buying them, she was embracing fashionable modernity led by new materials and atomic energy? Would she even have cared, now that she had her elegantly manicured hands on some precious nylons?!
Holy Atomic Stockings, Batman!

For more original packaging from across the ages, visit Robert Opie’s Museum of Brands in London.